Papilio multicaudata, the two-tailed swallowtail, is a species of the family Papilionidae found in western North America from British Columbia to Central America.

The two-tailed swallowtail is a large swallowtail of western North America, one of several species that have yellow wings with black tiger striping. Each hindwing has several blue markings (top and bottom). Like other striped swallowtails, it has a small orange eyespot near the lower angle of each hindwing; the eyespots can fool predators into attacking the rear of the butterfly instead of the head, giving the butterfly a chance to escape. Its appearance is similar to the western, and eastern tiger swallowtails, but has narrower black stripes and usually two tails on each hindwing (rather than only one). Most two-tails have a black "slit pupil" in the orange eyespot on each hindwing, never present in western tiger. It is also usually larger than similar swallowtails within its range, although some eastern tiger swallowtails are as big as any two-tailed. The wingspan ranges from 3 to 6.5 inches (7.6 to 16.5 cm), making it the largest swallowtail in western North America. As is the case with most swallowtails, females are larger and more brightly colored than males, having more blue and orange markings on the hindwings. It does not tend to hybridize with related species as do the western, eastern, and Canadian tiger swallowtails. 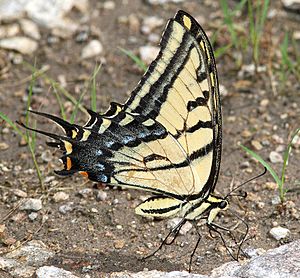 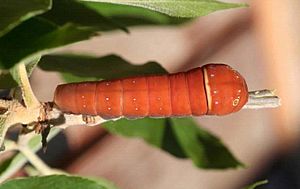 The butterfly can be seen from Guatemala, through Mexico, the western United States to southern Canada in southern British Columbia, Alberta and southwestern Saskatchewan. It typically lives near streams and in moist valleys but also in canyons and cities at lower elevations.

The two-tailed swallowtail is the state butterfly of Arizona.

Adults fly during spring and summer and there is one brood. Females lay eggs singly on the host plant. The caterpillar will fold the host plant's leaves and tie them together with silk they will then eat from this structure. The pupae will overwinter then emerge in May.

All content from Kiddle encyclopedia articles (including the article images and facts) can be freely used under Attribution-ShareAlike license, unless stated otherwise. Cite this article:
Papilio multicaudata Facts for Kids. Kiddle Encyclopedia.