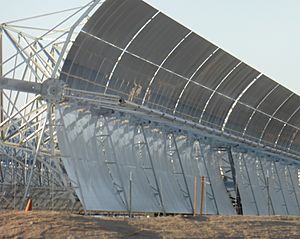 Parabolic trough at a plant near Harper Lake, California

A parabolic trough is similar to a solar panel tower, because it has parabolic mirrors that collect large amounts of heat which is reflected on water-filled pipes . The water is heated until it turns into steam, rotating a turbine using a large steam piston.

The rotating turbine produces electricity, which is then transferred by transformer, before being converted DC to AC and transferred by current lines.

All content from Kiddle encyclopedia articles (including the article images and facts) can be freely used under Attribution-ShareAlike license, unless stated otherwise. Cite this article:
Parabolic trough Facts for Kids. Kiddle Encyclopedia.