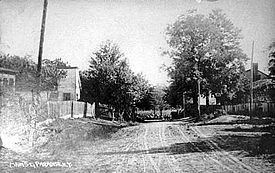 Paradise was a small town in Muhlenberg County, Kentucky, United States. The town was located 10.5 miles east-north-east of Greenville and was formerly called Stom's Landing (sometimes incorrectly spelled Stum). It was once a trading post along the Green River, but it no longer exists. It was torn down in 1967 by the Tennessee Valley Authority due to health concerns over its proximity to a nearby coal-burning electric plant, Paradise Fossil Plant.

Paradise was settled in the early nineteenth century when it was known as Stom's Landing, for Leonard Stom who founded the ferry there. It may have once been named Monterey. The origin of its final name of Paradise is not known. It is postulated the name was descriptive, for settlers who considered the setting to be paradise. A post office was established at Paradise on March 1, 1852; it closed in 1967.

In 1959, the TVA built a coal plant at the former site of Paradise. The coal-fired plants remain controversial and the Paradise permits in particular, have been criticized by environmentalists for non-compliance with the Clean Air Act. Since construction of new scrubbers on Unit 3 at Paradise, the plant's emissions from the massive unit have dropped dramatically in recent years; this in turn has led to a dramatic drop in toxic emissions from the plant overall.

A song about Paradise, Kentucky, called "Paradise", was written and made famous by singer/songwriter John Prine. The lyrics attribute the destruction of Paradise to the Peabody company, and allude to the fact that the town was a site for strip mining. In reality, the town remained in partial form after the Pittsburg & Midway Coal Mining Company and Peabody Coal Company stripped the coal around it. The Paradise Fossil Plant was initially erected with only two units; afterwards, the residents who were left in the village were bought out by the Tennessee Valley Authority after ash fall from the newly opened plant brought health concerns to the area. Soon after the TVA bought the town out, they tore down all the structures and constructed the largest cyclonic fired boiler in the world at the new "Paradise Unit 3". All that remains of the original town is a small cemetery at the top of a hill close to the plant. The town was not abandoned by any flooding of the Green River. Even though the town did endure numerous floods during its lifespan, it survived all the floods of its history.

Numerous cover versions of the song have been recorded.

All content from Kiddle encyclopedia articles (including the article images and facts) can be freely used under Attribution-ShareAlike license, unless stated otherwise. Cite this article:
Paradise, Kentucky Facts for Kids. Kiddle Encyclopedia.