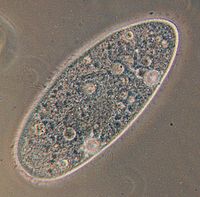 Paramecium is one of the best-known protists, often taught in school biology courses. It is a ciliate genus. Ciliates are a clade of protists which move by synchronous waves of tiny projections from their cuticle. These projections are called cilia (singular: cilium). The species range from 50 to 350 μm in length. They live in freshwater ponds, and eat bacteria, and other protists such as single-celled algae.

Paramecium species usually have bacterial symbionts, and some species have green algal symbionts. 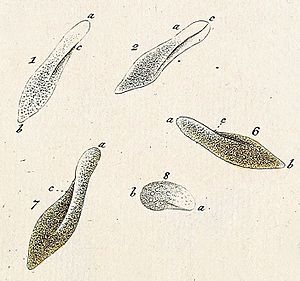 Reproduction in Paramecium has been researched for many years. Paramecium has two nuclei (a large macronucleus and a single compact micronucleus). They cannot survive without the macronucleus and cannot reproduce without the micronucleus. Reproduction is either by binary fission (asexual), conjugation (sexual), or, rarely, by endomixis, a process of self-fertilisation. During binary fission a fully grown organism divides into two daughter cells. Conjugation consists of the temporary union of two organisms and the exchange of micro-nuclear elements. Without the rejuvenating effects of conjugation a paramecium ages and dies. Only opposite mating types, or genetically compatible organisms, can unite in conjugation.

This reproductive system is unique to ciliates, and is one of the reasons why we think the Protista is not a natural clade (monophyletic), but rather a polyphyletic collection of single-celled organisms.

This species consists of 14 "syngens", each genetically isolated from every other, and biochemically unique. Each syngen has two mating types. The syngens are so similar in appearance that they have not been given separate species names.p322

All content from Kiddle encyclopedia articles (including the article images and facts) can be freely used under Attribution-ShareAlike license, unless stated otherwise. Cite this article:
Paramecium Facts for Kids. Kiddle Encyclopedia.