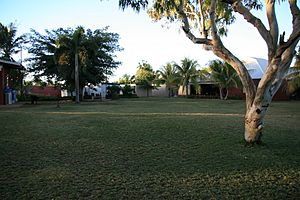 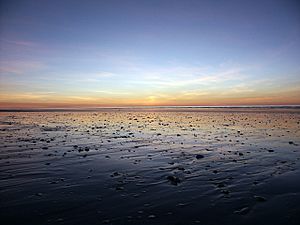 The property used to be about 250,000 acres (1,000 km2) in size. It is on the western end of the Great Sandy Desert where it meets the Indian Ocean at the southern end of the Eighty Mile Beach.

Mount Goldsworthy, located on the South Western side of the lease, is the site of the first iron ore mine in the Pilbara region of Western Australia. The Pardoo mine, also an iron ore mine, is located in the region, too, and shares the stations name.

The station was sold in late 2014 by the Rogers family to a Singaporean-based investor, Bruce Cheung, for A$13.5 million. Cheung's company, the Pardoo Beef Corporation appointed Eric Golangco as the general manager. At this time the property was running 5,700 head of cattle on 1,998 square kilometres (771 sq mi). Centre-pivot irrigation is being used to produce extra hay for stock. The property also has 60 kilometres (37 mi) of ocean frontage and has a 145-bay caravan park tourist operation.

A Mr. S. Anderson was the proprietor of the Station in 1892. Heavy rains in April of that year led to heavy stock losses with around 100 cattle, 1,500 sheep and 30 horses being lost in the deluge. In May of the same year he was thrown from his horse sustaining severe injuries, which resulted in him being taken to Roebourne for hospitalisation.

Seven Aborigines were caught killing and stealing sheep from the station in 1893. They were sentenced to four years hard labour and eighteen lashes with the cat.

In 1913 the station had an estimated flock of 20,000 sheep which were to be shorn using the 12 stands in the shearing shed in July of that year.

The area was flooded following heavy rains in 1929.

Frank Snellgrove Thompson owned the station from at least 1929 until his death in 1937. His son, Frank Finlayson Thompson, took over control of the property until at least 1951, in addition to the family merino stud property Nardlah near Broomehill in the Great Southern region of the state.

In 1951 a seventy-year-old man, Hans Pederson, fell 30 feet (9.1 m) from a windmill tower. The Royal Flying Doctor Service sent a plane from Port Hedland but it arrived too late and Pederson had died.

Pardoo was an outcamp of De Grey Station but became a separate entity owned by the Thompson family until 1963 when Frank Thompson sold it to Leslie (Les) Schubert. Les Schubert describes the history of the station in his book.

In November 1965 Schubert swapped Pardoo along with a cash adjustment of $120,000 for Louisa Downs and Bohemia Downs stations in the Kimberley Region. Karl Stein took over the station in January 1966.

Sometime before 1977 Karl Stein retired and sold Pardoo to Russel Peake. The Leeds family purchased Pardoo from Peake and then sold the lease for Pardoo to Graeme and Judith Rogers. Pardoo is operating under the Crown Lease numbers CL694-1967 and CL194-1983 and have the associated Land Act numbers LA3114/446 and LA398/718.

In 2012 the station lay directly in the path of Cyclone Lua and most staff were evacuated to Port Hedland to wait the storm out. The Anderson family and two station hands remained at the property. The area was hit by 270-kilometre-per-hour (170 mph) winds and heavy rain with many trees uprooted, the roadhouse owner, Janet Robb, described the property as looking like an absolute warzone. Pardoo also took the brunt of Cyclone Rusty in February 2013 recording 250 millimetres (10 in) of rain in 24 hours along with strong winds. Stock was killed from hypothermia and the homestead was damaged due to the category four cyclone.

All content from Kiddle encyclopedia articles (including the article images and facts) can be freely used under Attribution-ShareAlike license, unless stated otherwise. Cite this article:
Pardoo Station Facts for Kids. Kiddle Encyclopedia.