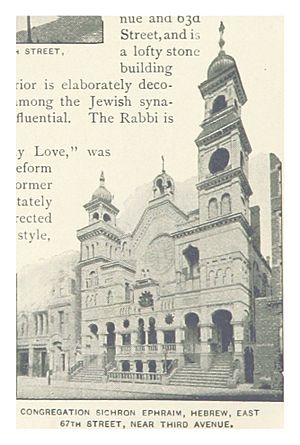 Park East Synagogue is located on the Upper East Side of Manhattan, in New York City.

Congregation Zichron Ephraim was established by Rabbi Bernard Drachman and Jonas Weil to promote Orthodox Judaism as an alternative to Reform Judaism popular on the Upper East Side.

The building was built in 1889-1890. The architects were Schneider and Herter who designed numerous tenements on New York's Lower East Side as well as Hell's Kitchen neighborhoods. The building is similar to other synagogues built at the time which were in the Moorish Revival style that also featured a prominent Rose Window. One of the most remarkable characteristics is the asymmetrical twin towers with the eastern tower being taller (most other synagogues of the period featured twin towers of similar height). The towers are also adorned differently. Each of the towers originally was also topped by a bulbous dome which has since been removed. It is one of fewer than a hundred surviving nineteenth-century American synagogues.

Over the doorway engraved in granite and written in Hebrew is a verse from Psalm 100. "Enter into His Gates with Thanksgiving and into His courts with praise."

Rabbi Drachman served as spiritual leader for fifty-one years. He died in 1945. Zev Zahavy was appointed rabbi of the synagogue on September 1, 1952. He was known as a dynamic spokesman for Orthodox Judaism. More than 200 of his sermons were reported on in the New York Times. He and his wife Edith, a noted educator, founded the Park East Day School. On March 16, 1957, Robert Briscoe, the Jewish Lord Mayor of Dublin, carrying his tallis bag, visited and prayed at the synagogue on Shabbos morning.

Since 1962, the synagogue's rabbi has been Arthur Schneier. The Assistant Rabbi is Benjamin Goldschmidt. Rabbi Harold Einsidler is the religious spiritual organizer and principal of the religious school, his wife Toby is the dynamic office and youth leader. The synagogue's Chief Cantor is Yitzchak Meir Helfgot and its Cantor is Benny Rogosnitzky.

The Park East Day School now educates children from early childhood through eighth grade. The synagogue building is listed on the National Register of Historic Places.

In 2008, Pope Benedict XVI visited the synagogue in the midst of a visit to New York City. This was the third papal visit to a synagogue and the only such visit in the United States of America. The Pope was given a box of matzahs and a silver Seder plate (it was almost Passover when the visit occurred); members of both the Catholic and Jewish religions wore their respective skullcaps.

In 2016, the synagogue was the subject of international press coverage when members of the synagogue heckled and jeered U.N. Director General Ban Ki-moon as he gave an address in honor of International Holocaust Remembrance Day. In his speech, he called the Holocaust a "colossal crime" and added that he is "deeply disturbed by the massacres in South Sudan, by the continued carnage in Syria, and by the atrocities being inflicted by Daesh and Boko Haram." Earlier he had criticized Israel's occupation of the West Bank, and congregants were angry regarding his criticism of Israel, claiming it promoted terrorism. He later repeated his criticism of Israel but added that he in no way condoned terrorism.

All content from Kiddle encyclopedia articles (including the article images and facts) can be freely used under Attribution-ShareAlike license, unless stated otherwise. Cite this article:
Park East Synagogue Facts for Kids. Kiddle Encyclopedia.