Park Street District is a subneighborhood of the Arena District in Columbus, Ohio. The District gets its name from the heavily trafficked Park Street thoroughfare that runs through its core. Devoid of any large residential land, the district comprises mainly restaurants and bars. The site was developed through multiple partners, including entrepreneur Chris Corso of the Park Street Complex. The district is often considered to be part of the Short North due to its overlapping boundaries and mutual attractions such as the North Market.

Park Street's "official" history begins to take form around the late 19th century, when the area was a hotspot for industry. The history of Park Street overlaps with that of the Arena district, whose claim to fame is that it was the home of the Ohio State Penitentiary until its demolition in the 1980s. Then, with the subsequent opening of Nationwide Arena in 2000 to host Columbus's new NHL franchise, the new district began to arise. The area surrounding the Arena district was also heavily industrial, home to many manufacturing plants and factories. Park Street District itself was also largely industrial, however many of the land parcels located around Park Street were dedicated to a mix of residential and industrial uses. It was during this time that a schoolhouse was constructed, on what is now the properties of Brother's Bar and Gaswerks.

The 17-acre Park Street District is located just north of the Arena District and is bound to the south by Vine Street, the North by Interstate 670 the east by North High Street and to the West by Neil Avenue . The main thoroughfare in the district is Park Street, which runs north to south through the district's center. The district is noticeably lacking in green space except for a few plant enclosures on its sidewalks, and its close proximity to Goodale Park. 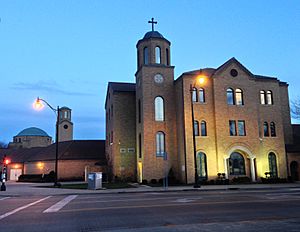 The Greek Orthodox Cathedral was modeled in Byzantine style displayed by the prominent dome and tall bell-tower. The parish was founded in the early 1900s when a small group of Greek families in the Central Ohio area banded together, pooled their money, and built a church. By the end of the century, the Parish had become too big for its church. The current cathedral was designed and constructed in 1990. It has won several City Beautiful Awards for design. The old church is still part of the cathedral complex. It is occasionally used for smaller services. 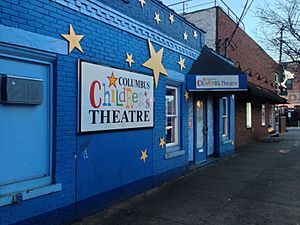 Howard Bloom and his wife, noticing a deficiency in fine arts education in the Columbus area, founded the Columbus Junior Theater of the Arts in 1963. Classes were first taught on Broad Street, then at the Trinity Episcopal Church. In 1966, a new Main Street building was bought. A year later, the Columbus Foundation and the Ohio Arts Council helped to fund a full-time staff for the theater. Over time, the theater expanded to include summer classes, week-long camps, and a touring troupe. The theater worked to expand into Columbus Schools as well. In 1983, a writing competition was launched among Columbus Schools to submit screenplays, scripts, and monologues. In 1985, the theater moved into 504 N. Park Street. In 1999, due to increased profits and attendance, a new theatre at 512 Park Street was purchased to meet the growing demands of the successful theater. The Columbus Children's Theater is currently located at 512 Park Street, where it sees close to a million dollars of annual revenue. Josh Radnor, star of How I Met Your Mother, is a notable alumni of the Columbus Children's Theater.

All content from Kiddle encyclopedia articles (including the article images and facts) can be freely used under Attribution-ShareAlike license, unless stated otherwise. Cite this article:
Park Street District, Columbus, Ohio Facts for Kids. Kiddle Encyclopedia.