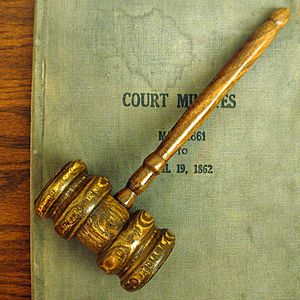 The gavel is a common symbol of parliamentary procedure.

Parliamentary procedure is a commonly accepted way in which a group of people work together to discuss and make decisions. It is a set of rules for meetings.

The term gets its name from its use in the Parliamentary system of government.

In the 16th century, there were rules of order in the early British Parliaments. In the 1560s, Sir Thomas Smith published a book about the procedures in the House of Commons in 1583. Early rules included

The Westminster parliamentary procedures are followed in several Commonwealth countries, including the United Kingdom, Canada, Australia, New Zealand, India, and South Africa. In Canada, for example, Parliament uses [House of Commons Procedure and Practice as its primary procedural authority.

In contrast, the procedures of the Diet of Japan have moved away from the British parliamentary model. After the end of World War II, there were efforts to bring Japanese parliamentary procedures more in line with American congressional practices. In Japan, informal negotiations are more important than formal procedures.

In the US, the most widely used set of rules is Robert's Rules of Order.

All content from Kiddle encyclopedia articles (including the article images and facts) can be freely used under Attribution-ShareAlike license, unless stated otherwise. Cite this article:
Parliamentary procedure Facts for Kids. Kiddle Encyclopedia.