Parwān (Persian/Pashto: پروان), also spelled Parvān, is one of the thirty-four provinces of Afghanistan. There are about 560,000 people. The capital is Charikar.

In 329 BC, Alexander the Great formed the settlement of Parwan. It was conquered by the Arabs in 792. 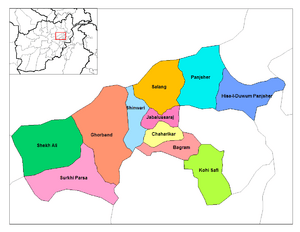 All content from Kiddle encyclopedia articles (including the article images and facts) can be freely used under Attribution-ShareAlike license, unless stated otherwise. Cite this article:
Parwan Province Facts for Kids. Kiddle Encyclopedia.