Kapisa (Pashto/Persian: کاپيسا) is one of the 34 provinces of Afghanistan. It is in the north-east of the country. The capital is Mahmud-i-Raqi. There are about 364,900 people living in the province. 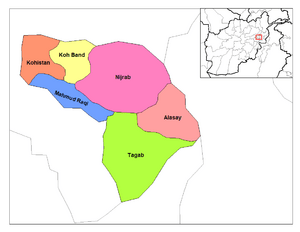 All content from Kiddle encyclopedia articles (including the article images and facts) can be freely used under Attribution-ShareAlike license, unless stated otherwise. Cite this article:
Kapisa Province Facts for Kids. Kiddle Encyclopedia.