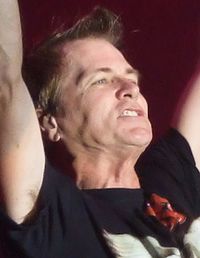 Pat Torpey (December 13, 1953 – February 7, 2018) was an American hard rock drummer and singer. He was born in Cleveland, Ohio. He was known as the drummer and backing vocalist of the hard rock band Mr. Big.

Torpey died on February 7, 2018 of complications from Parkinson's disease at the age of 64.

All content from Kiddle encyclopedia articles (including the article images and facts) can be freely used under Attribution-ShareAlike license, unless stated otherwise. Cite this article:
Pat Torpey Facts for Kids. Kiddle Encyclopedia.