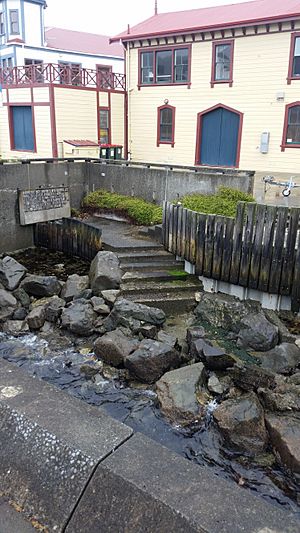 The quotation for Patricia Grace on the Wellington Writers Walk, Wellington, New Zealand

Her first published work, Waiariki (1975), was the first collection of short stories by a Māori woman writer. She has been described as "a key figure in contemporary world literature and in Maori literature in English." She was awarded the 2008 Neustadt International Prize for Literature.

Grace is descended from Ngāti Toa, Ngāti Raukawa and Te Āti Awa. She was born in Wellington where she received the majority of her education, first at St Mary's College and then at Teachers' Training College. She began writing at age 25, while working full time as a teacher in North Auckland. Her first published short stories were in Te Ao Hou and the New Zealand Listener.

Waiariki, her first published book, won the PEN/Hubert Church Memorial Award for Best First Book of Fiction. It was a collection of short stories and the first to be published by a female Māori writer.

Grace currently lives in Hongoeka Bay, Plimmerton. She is a patron of the Coalition for Open Government.

In the 1988 Queen's Birthday Honours, Grace was appointed a Companion of the Queen's Service Order for community service. In 1989, she was awarded an Honorary Doctorate of Literature (LitD) by Victoria University of Wellington.

In 2006, she was one of three honourees awarded the Prime Minister's Awards for Literary Achievement. Grace was appointed a Distinguished Companion of the New Zealand Order of Merit (DCNZM), for services to literature, in the 2007 Queen's Birthday Honours. In 2009, she declined redesignation as a Dame Companion following the restoration of titular honours by the New Zealand government.

Grace received an honorary Doctorate of Letters (DLit) by the World Indigenous Nations University in 2016, conferred at Te Wānanga o Raukawa, Ōtaki, for her literary accomplishments and her writing around Māori themes.

It Used To Be Green Once-Date Unknown

All content from Kiddle encyclopedia articles (including the article images and facts) can be freely used under Attribution-ShareAlike license, unless stated otherwise. Cite this article:
Patricia Grace Facts for Kids. Kiddle Encyclopedia.