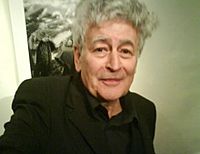 In 1972 he was appointed director of the Conservatory of Champigny-sur-Marne until 1988. He also was professor of composition and orchestration at the Paris Conservatory until 2002.

From 1996 until 2005 he directed the Conservatory of Versailles.

All content from Kiddle encyclopedia articles (including the article images and facts) can be freely used under Attribution-ShareAlike license, unless stated otherwise. Cite this article:
Paul Méfano Facts for Kids. Kiddle Encyclopedia.