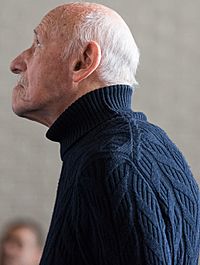 Paul Sobol (26 June 1926 – 17 November 2020) was a French-born Belgian educator, writer and Holocaust survivor. He was widely known as one of the country's best known "passeur de mémoire" (memory keepers).

He was born in Paris. He was deported to Auschwitz concentration camp on 31 July 1944. He was involved in the death marches to Gross-Rosen concentration camp and escaped on 25 April 1945 during a transfer to another camp. His parents and younger brother were killed.

All content from Kiddle encyclopedia articles (including the article images and facts) can be freely used under Attribution-ShareAlike license, unless stated otherwise. Cite this article:
Paul Sobol Facts for Kids. Kiddle Encyclopedia.