Paul Stewart (born June 1955) is a writer of children's books, best known for three series written in collaboration with the illustrator Chris Riddell: The Edge Chronicles, the Free Lance novels, and the Far Flung Adventures series.

Stewart was born in London in 1955. His family lived first in Muswell Hill, North London and later in Morden, South London, where he went to school. His favourite subject at school was English and he hated Mathematics. When Stewart left school, he went travelling, spending several months in Greece, where he took various jobs, including picking oranges and grapes, and whitewashing hotels.

From 1974 to 1977, Stewart studied at the University of Lancaster, majoring in English, (which included a Creative Writing unit) with a minor in Religious Education. On graduation, he went travelling again, before enrolling in 1978 to do an M.A. in Creative Writing with Angela Carter and Malcolm Bradbury at the University of East Anglia. He went to Heidelberg, Germany in 1979 for three years, both as a teacher of English and as a student at Heidelberg University, learning German. In 1982, he went to Sri Lanka to teach English as a foreign language returning to the UK a year later where he continued to teach (1983–90) before becoming a full-time writer.

Stewart's first book to be published was The Thought Domain (1988) which was then followed by a number of other children's and young adult novels, chiefly in the thriller, horror and SF/Fantasy genres. Stewart's only adult book to date, Trek, was published in 1991.

Stewart's favourite books when a child were The Phantom Tollbooth by Norton Juster, Lewis Carroll's Alice in Wonderland, Rupert Bear Annuals, and the works of Alan Garner, especially Elidor. He also read a lot of science fiction.

Stewart started writing at a very young age. At the age of seven he was writing a series about a snail called Oliver and he started a sequel to The Phantom Tollbooth at ten. Some of the ideas from this early work were later developed and became the basis of The Thought Domain which was published in 1988. 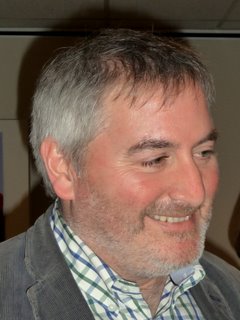 Stewart first met Chris Riddell in 1993, through having children at the same school. Riddell was looking for someone to write texts that he could illustrate. Stewart had already had a number of books published. Their first collaborative work were the Rabbit and Hedgehog books (published 1998–2003 by Andersen Press). The inspiration for The Edge Chronicles came from a map Riddell drew of an imaginary world in 1994 and then challenged Stewart to write about it. The first book in the sequence, Beyond the Deepwoods, was commissioned by Transworld Publishers (now part of the Random House Group) on the basis of the map and the first four chapters. The book then took three years to write as Stewart and Riddell worked out both the plot and how best to work together. Originally commissioned as a single book, Stewart and Riddell hoped that it might become a trilogy. The series has now extended to fifteen full-length novels, five short stories, a book of maps and a now-defunct blog called Weird New Worlds. The final book, The Descenders, was released in 2019.

When writing together, Stewart and Riddell work on the development of plots and characters together, sometimes starting from a bit of writing, sometimes from an illustration on one of Riddell's sketchbooks. They have long conversations over many days, during which the novels emerge. They don't always agree and the debates can become quite heated but they have remained good friends. Following these discussions, Stewart normally writes a first draft, which Riddell will edit or rewrite before Stewart produces a final draft.

As well as The Edge Chronicles, Stewart and Riddell have also collaborated on a trilogy of shorter adventures, Freelance; a quartet of younger books, The Far Flung Adventures, the first of which, Fergus Crane, won the Nestlé Smarties Book Prize (Gold Medal) in 2004; The Blobheads series (2000–2004); Muddle Earth (2003), and a further quartet, Barnaby Grimes (2007–2009). Their latest novel, Wyrmeweald trilogy, was published by Doubleday Children's Books in April 2010.

Stewart lives in the British seaside city of Brighton with his wife and children.

These three books constitute the Far Flung Adventures series, written by Stewart and illustrated by Riddell.

All content from Kiddle encyclopedia articles (including the article images and facts) can be freely used under Attribution-ShareAlike license, unless stated otherwise. Cite this article:
Paul Stewart (writer) Facts for Kids. Kiddle Encyclopedia.