Rupert Bear is a British children's comic strip character created by British artist Mary Tourtel and first appearing in the Daily Express newspaper on 8 November 1920. Rupert's initial purpose was to win sales from the rival Daily Mail and Daily Mirror. In 1935, the stories were taken over by Alfred Bestall, who was previously an illustrator for Punch and other glossy magazines. Bestall proved to be successful in the field of children's literature and worked on Rupert stories and artwork into his 90s. More recently, various other artists and writers have continued the series. About 50 million copies have been sold worldwide.

The comic strip was, and still is, published daily in the Daily Express, with many of these stories later being printed in books, and every year since 1936 a Rupert annual has also been released. Rupert Bear has become a well-known character in children's culture in the United Kingdom, and the success of the Rupert stories has led to the creation of several television series based on the character. The character also has a large fan following, with such groups as The Followers of Rupert.

Rupert is a bear who lives with his parents in a house in Nutwood, a fictional idyllic English village. He is drawn wearing a red jumper and bright yellow checked trousers, with matching yellow scarf. Originally depicted as a brown bear, his colour soon changed to white to save on printing costs, though he remained brown on the covers of the annuals.

Most of the other characters in the series are also anthropomorphic animals (animals with humanoid forms). They are all scaled to be about the same size as Rupert, regardless of species. Rupert's animal friends are usually referred to as his "chums" or "pals." Aside from his best friend Bill Badger, some of the most enduring pals are an elephant (Edward Trunk), a mouse (Willie), Pong-Ping the Pekingese, Algy Pug (who actually pre-dates Rupert), Podgy Pig, Bingo the Brainy Pup, Freddie and Ferdy Fox, the identical twins Reggie and Rex Rabbit, and Ming the dragon. The kindly Wise Old Goat also lives in Nutwood, and helps Rupert in some of his adventures. One of the most unusual and evocative characters is Raggety, a woodland troll-creature made from twigs, who is often very grumpy and annoying. In the 2006 television revival of the series, Raggety has been transformed into a friendly elf with broken English. There is also a recurring country Police Officer who is an adult dog named PC Growler.

There are also a few human characters in the stories, such as the Professor (who lives in a castle with his servant, Bodkin), Tiger Lily (a Chinese girl), her father "the Conjuror," and several less frequently occurring characters such as Sailor Sam, Gaffer Jarge, Captain Binnacle and Rollo, the Gypsy boy. There is also a recurring Merboy. During his time as Rupert writer, Alfred Bestall added further characters such as the girl guides Beryl, Pauline and Janet, with Beryl's cat, Dinky. These characters were based on Girl Guides from Bestall's own church who asked him in late 1947 if they could have their own adventure with Rupert. They remain part of the comic series even today.

The series often features fantastic and magical adventures in faraway lands. Each story begins in Nutwood, where Rupert usually sets out on a small errand for his mother or to visit a friend, which then develops into an adventure to an exotic place such as King Frost's Castle, the Kingdom of the Birds, underground, or to the bottom of the sea. Sometimes one of the Professor's inventions opens the door to one of Rupert's adventures. At the end of the story Rupert returns to Nutwood, where all is safe and well, and where his parents seem perfectly sanguine about his adventures.

Unlike most modern comic strips, Rupert Bear has always been produced in the original form of strip with illustrations accompanying text, called "text comics", as opposed to text being incorporated directly into the art; for example, within speech balloons.

Bestall developed the classic Rupert story format: the story is told in picture form (generally two panels each day in the newspaper and four panels to a page in the annuals), in simple page-headers, in rhyming two-line-per-image verse, and as running prose at the foot. Rupert Annuals can therefore be "read" on four levels. 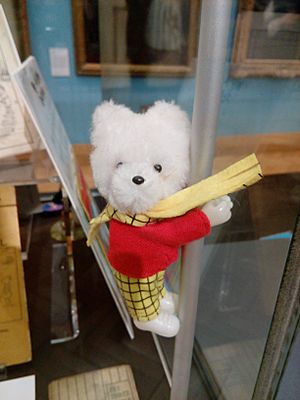 Every year since 1936, a Rupert Bear annual has been released, even during the years of World War II, during a paper shortage. 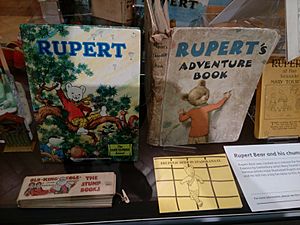 All of these books were written and illustrated by Mary Tourtel and originally published from 1928–1936, by Sampson Low. There were 46 books in the original series.

Some of the titles were later published for the Woolworth's retail chain, with only 18 of the original titles. However, the titles and numbers for this series did not relate to the earlier published series.

Brainwaves Limited of Basingstoke, Hampshire, produced a series of Rupert storybooks in 1991 (no author or artist credited):

In addition, they published other Rupert series:

Rupert first appeared on television in an ITC series produced for the ITV network that ran for 156 ten-minute episodes. The characters were all puppets, although the opening sequence featured a toy Rupert bear sitting in a live-action child's bedroom. Rupert's friends and flying chariot appeared straight from the Daily Express pages, although he was joined by some new friends including a sprite called Willy Wisp.

One of the most memorable elements of the series was the catchy theme song, written by Len Beadle (also known as Frank Weston) and Ron Roker, sung by Jackie Lee, which reached number 14 in the UK charts in 1971. The song included the erroneous lyric "Rupert the Bear" (Rupert has never officially had the definite article in his name).

A short film directed by Geoff Dunbar based on ideas/music/songs by Paul McCartney was made in 1985, titled Rupert and the Frog Song. It follows Rupert as he explores the country one night and finds a special gathering of frogs. The film contains a song titled "We All Stand Together", written by McCartney and arranged by the Beatles' producer George Martin. The song reached No.3 in the UK Singles Chart.

Rupert returned to television in 1985 to the BBC, in the form of 36 short five minute-stories. In this series, each episode consisted of a series of still illustrations and narration. The sole narrator was Ray Brooks. The short title music is credited to Brave New World. In the US these shorts aired on the Disney Channel as part of its Lunchbox program. A selection of the episodes have been released on a number of VHS videos, no official DVD releases are so far available as of 2017.

In 1991, Rupert Bear got his own animated television series with 65 episodes and five seasons (13 per season) produced by Nelvana (Canada), Ellipse (France) and Television South (TVS) for the first season (13 episodes), with Scottish TV taking over control from season 2 when Television South lost its ITV franchise. The show greatly followed the style and tone Bestall established in the Rupert newspaper series, with many of the stories being almost direct adaptations of his or others' panel stories from the Daily Express.

It was broadcast in syndication on YTV in Canada. In the United States the show first aired on Nickelodeon before moving to CBS in January 1999; repeats of the series came to Qubo's digital service in January 2007. The show was broadcast in the UK on CITV. In Australia, the show was broadcast on the ABC and on TV2 in New Zealand as part of the Jason Gunn show. The series has been re-aired in the UK on the satellite and cable channel Tiny Pop. As of 2009 the show also airs daily on Qubo channel, although only the latter 26 episodes are currently being shown. In South America, the series was broadcast in Brazil by the TV Cultura channel between 1998 and 2008.

According to the BBC News portal, in 2000 the Canadian producer Nelvana made plans to produce a feature film about Rupert at Hollywood studios, but the project was not implemented.

In 2006 a new Rupert Bear stop-motion-animated television series was produced, skewing almost entirely towards small children. Notable changes to the characters are that Rupert wears trainers/sneakers and his fur has a slight tan; Bill wears a dark blue leather jacket and blue pants with yellow stripes instead of his suit and bowtie, and tends to carry a personal digital assistant with him at all times; Pong Ping has become a girl who uses magic and had her name reversed; Raggety, who rarely appeared before, has become a friendly tree elf; Ming a baby dragon and Ping Pong's pet; Edward no longer has tusks, his trunk has been straightened and he wears an orange T-shirt and brown shorts; and one of the fox twins (Ferdie) has been changed into a girl named Freda. There are new characters like Miranda the mermaid; but characters Podgy Pig, his self-obsessed sister Rosalie and the timid Willie Mouse make no appearances.

Rupert Bear, Follow The Magic ... was broadcast on Five from November 8, 2006 to February 1, 2008. Fifty-two ten-minute episodes were broadcast and subsequently repeated.

The British video-game publisher Quicksilva adapted Rupert Bear for the Commodore 64 and ZX Spectrum 8-bit computers, in two game instalments: the 1985 Rupert and the Toymaker's Party and the 1986 Rupert and The Ice Castle.

In September 2020, Royal Mail issued a set of eight stamps to commemorate the centenary of Rupert Bear. Featuring Bestall's artwork, they comprised two second-class stamps, two first-class, two at £1.45 and two at £1.70.

All content from Kiddle encyclopedia articles (including the article images and facts) can be freely used under Attribution-ShareAlike license, unless stated otherwise. Cite this article:
Rupert Bear Facts for Kids. Kiddle Encyclopedia.