Penstemon cobaea is a flowering plant in the plantain family, commonly known as cobaea beardtongue, prairie beardtongue or foxglove penstemon. The plant is native to the central United States, primarily the Great Plains from Nebraska to Texas, with additional populations in the Ozarks of Missouri and Arkansas. There are also populations reported in the southwestern United States as well as in Illinois and Ohio, but these appear to be introductions. 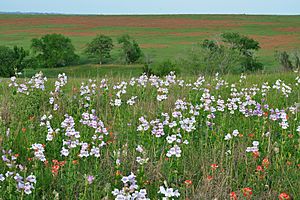 The flowers of Penstemon cobaea will eventually become brown and black capsules, which contain the seeds. After planting, the seeds will take about two years to flower. It is good to leave 16 to 20 inches between plants when gardening, and lime is often needed in the soil.

All content from Kiddle encyclopedia articles (including the article images and facts) can be freely used under Attribution-ShareAlike license, unless stated otherwise. Cite this article:
Penstemon cobaea Facts for Kids. Kiddle Encyclopedia.