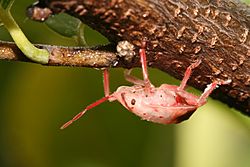 Pentatomoidea is a superfamily of bugs in the Heteroptera suborder. They are often called shield bugs or stink bugs. They are very common, with about 7000 species.

They share a common arrangement of sucking mouthparts. They have a kind of tough shield on their back. It is part of the thorax which goes back over the abdomen. They also have glands between the first and second pair of legs. These glands produce a foul-smelling liquid. The shield and foul liquid work to deter potential predators. Their young, called 'nymphs', also have stink glands.

There are 15 families in this group. One of them, the Pentatomidae are especially known as stink bugs. It is the largest family in Pentatomoidea, with about 900 genera and over 4700 species.

All content from Kiddle encyclopedia articles (including the article images and facts) can be freely used under Attribution-ShareAlike license, unless stated otherwise. Cite this article:
Pentatomoidea Facts for Kids. Kiddle Encyclopedia.