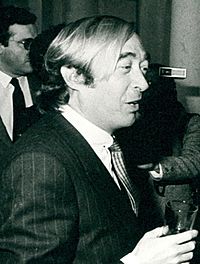 José Manuel Oneto Revuelta (14 March 1942 – 7 October 2019), better known as Pepe Oneto, was a Spanish journalist and writer. He was one of the greatest journalists during the Spanish transition to democracy. He was born in San Fernando, Cádiz, Spain. In 1974 he joined the staff of the magazine Cambio 16, becoming its director in 1976. In 1986 he joined the Zeta Group, going on to run the magazine Tiempo, until 1996.

He was also Director of Informational at Antena 3 Televisión between 1996 and 1998. In 2000, and again in 2016, he was appointed member of the Board of Directors of Telemadrid.

Oneto died on 7 October 2019 at a hospital in San Sebastián, Spain at the age of 77 from sepsis caused by peritonitis.

All content from Kiddle encyclopedia articles (including the article images and facts) can be freely used under Attribution-ShareAlike license, unless stated otherwise. Cite this article:
Pepe Oneto Facts for Kids. Kiddle Encyclopedia.