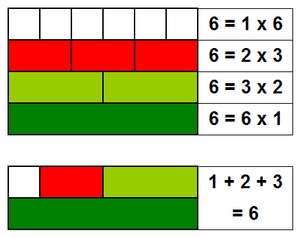 Illustration of the perfect number status of the number 6

A number is called a perfect number if by adding all the positive divisors of the number (except itself), the result is the number itself.

Perfect numbers that are even

Euclid discovered that the first four perfect numbers are generated by the formula 2n-1(2n - 1):

) has 8 digits. This falsifies the first assumption. For the second assumption, the fifth perfect number indeed ends with a 6. However, the sixth (8 589 869 056) also ends in a 6. It is straightforward to show the last digit of any even perfect number must be 6 or 8.

to be prime, it is necessary that

should be prime. Prime numbers of the form 2n - 1 are known as Mersenne primes, after the seventeenth-century monk Marin Mersenne, who studied number theory and perfect numbers.

It is still not known if there are infinitely many Mersenne primes and perfect numbers. The search for new Mersenne primes is the goal of the GIMPS distributed computing project.

Perfect numbers that are odd

Any odd perfect number N must satisfy the following conditions:

be odd perfect number. Since divisor function is multiplicative,

must be an even not divisible by 4 and all the remaining must be odd.

Even perfect numbers have a very precise form; odd perfect numbers are rare, if indeed they do exist. There are a number of results on perfect numbers that are actually quite easy to prove but nevertheless superficially impressive; some of them also come under Richard Guy's Strong Law of Small Numbers:

The sum of proper divisors gives various other kinds of numbers. Numbers where the sum is less than the number itself are called deficient, and where it is greater than the number, abundant. These terms, together with perfect itself, come from Greek numerology. A pair of numbers which are the sum of each other's proper divisors are called amicable, and larger cycles of numbers are called sociable. A positive integer such that every smaller positive integer is a sum of distinct divisors of it is a practical number.

All content from Kiddle encyclopedia articles (including the article images and facts) can be freely used under Attribution-ShareAlike license, unless stated otherwise. Cite this article:
Perfect number Facts for Kids. Kiddle Encyclopedia.