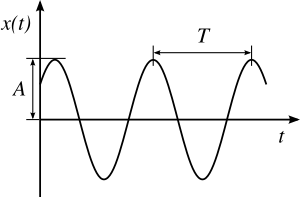 A period T is the time needed for one complete cycle of vibration to pass a given point. As the frequency of a wave increases, the period of the wave decreases. Frequency and Period are in a reciprocal relationship that can be expressed mathematically as: Period equals the Total time divided by the Number of cycles.

All content from Kiddle encyclopedia articles (including the article images and facts) can be freely used under Attribution-ShareAlike license, unless stated otherwise. Cite this article:
Period (physics) Facts for Kids. Kiddle Encyclopedia.