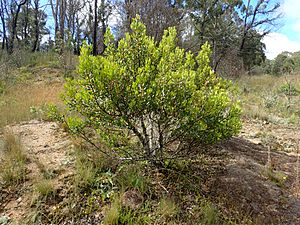 Persoonia oleoides is a species of flowering plant in the family Proteaceae and is endemic to north-eastern New South Wales. It is an erect to low-lying shrub with oblong to egg-shaped leaves and yellow flowers in groups of up to twenty-five on a rachis up to 130 mm (5.1 in) long.

Persoonia oleoides is an erect to low-lying shrub that typically grows to a height of 0.2–1 m (7.9 in–3 ft 3.4 in) and has smooth bark with young branchlets covered with greyish to rust-coloured hairs. The leaves are arranged alternately, oblong to elliptical, egg-shaped or spatula-shaped, 20–60 mm (0.79–2.36 in) long and 4–15 mm (0.16–0.59 in) wide. The flowers are arranged in leaf axils or on the ends of branches, sometimes on a rachis with a dormant bud on the end, sometimes on a rachis that continues to grow into a leafy branch. In the first case, there are up to three flowers on a rachis up to 10 mm (0.39 in) long. In the case of a rachis that grows into a leafy shoot, there are up to twenty-five flowers on a rachis up to 130 mm (5.1 in) long. Each flower is on a pedicel 1–3 mm (0.039–0.118 in) long, the tepals are yellow, hairy and 10–15 mm (0.39–0.59 in) long. Flowering occurs from January to February and the fruit is a green drupe, sometimes with purple stripes.

Persoonia oleoides was first formally described in 1991 by Lawrie Johnson and Peter Weston in the journal Telopea.

This geebung grows in forest between the upper Clarence River, the upper Macleay River and Barrington Tops in eastern New South Wales.

All content from Kiddle encyclopedia articles (including the article images and facts) can be freely used under Attribution-ShareAlike license, unless stated otherwise. Cite this article:
Persoonia oleoides Facts for Kids. Kiddle Encyclopedia.