Peter Luger Steak House is a steakhouse located in the Williamsburg section of Brooklyn, New York City, with a second location in Great Neck, New York, on Long Island. It was named to the James Beard Foundation's list of "America's Classics" in 2002 and is the third oldest operating steakhouse in New York City, after Keens and Old Homestead Steakhouse.

The Brooklyn location is known for its long wooden bar, and the "dining rooms have a Teutonic air, with exposed wooden beams, burnished oak wainscoting, brass chandeliers and weathered beer-hall tables".

The Brooklyn location was established in 1887 as "Carl Luger's Café, Billiards and Bowling Alley" in the then-predominantly German neighborhood that would shortly thereafter be in the shadow of the Williamsburg Bridge. German-born Peter Luger (1866–1941) was the owner, and nephew Carl was the chef. When Peter died in 1941, his son Frederick took over and the restaurant declined.

In 1950, Frederick shut the restaurant and put it up for auction. Bernard and Lester Magrill, local auctioneers and frequent patrons, conducted the auction. Sol Forman, and Seymour Sloyer who owned a metal giftware factory across the street, bought it as partners for a "whimsically low" bid. According to Lester Magrill, the purchase price was $35,000, which included the building as well as the restaurant. According to one history, "the neighborhood was declining, filling up with Hasidic Jews, whose kosher rules forbade the eating of Luger's hindquarters. Both Forman and Sloyer had been eating at Luger for twenty-five years, and they needed a place to take their clients. They were the only bidders during the auction. In 1968, Craig Claiborne of The New York Times gave a four star review of the steakhouse, under the new ownership.

In July 2009, while having dinner at Peter Luger, New York Governor David Paterson had Richard Ravitch secretly sworn in as Lieutenant Governor to oversee the stalemate-stricken State Senate. 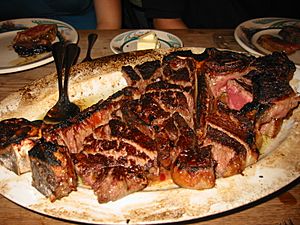 The menu at Peter Luger is sparse, with the focal point being a porterhouse steak sized for two to four.

All content from Kiddle encyclopedia articles (including the article images and facts) can be freely used under Attribution-ShareAlike license, unless stated otherwise. Cite this article:
Peter Luger Steak House Facts for Kids. Kiddle Encyclopedia.