Peter Manigault (October 10, 1731 – November 12, 1773) was a Charleston, South Carolina attorney, plantation owner, slave owner and colonial legislator. He was the wealthiest man in the British North American colonies at the time of his death and owned hundreds of slaves. He was the son-in-law of Joseph Wragg, the largest slave trader of North America in the 1730s.

He was privately educated in the Province of South Carolina and in England, traveled extensively in Europe, studied law at London's Inner Temple, and was called to the British bar in 1752. 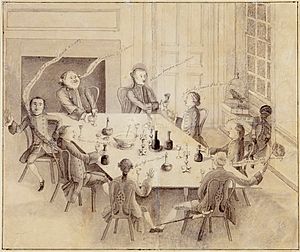 He returned to South Carolina in 1754, where he practiced law, became a successful merchant and banker, and managed his family's extensive plantation holdings, that included hundreds of slaves. By 1774 Manigault was the wealthiest person in the British North American colonies, with his net worth of approximately £33,000 in 1770 equal to approximately $4 million in 2016.

Manigault served in the South Carolina House of Commons in 1755, and again from 1766 to 1773. From 1765 to 1772 he was Speaker of the House. He actively opposed the British Stamp Act of 1765, and was identified with what became known as the Patriot cause.

During Manigault's studies in London and travels in Europe, he exchanged frequent letters with his parents. This correspondence was published as part of several articles over several years in the South Carolina Historical and Genealogical Magazine. 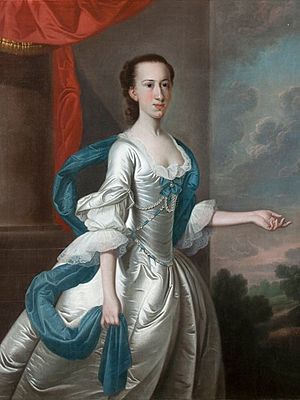 Portrait of his wife, Elizabeth, c. 1757, by Jeremiah Theus.

In 1755, Manigault was married to Elizabeth Wragg (1736–1773). She was the daughter of Judith (née Dubose) Wragg and Joseph Wragg, an English-born American who was one of the largest slave traders in British North America during his lifetime. Their children included:

In 1773, Manigault's health worsened, and he left South Carolina for England in an effort to find a cure. His wife died on February 19, 1773. Manigault's health did not improve, and he died in London on November 12, 1773. He was buried at French Protestant Huguenot Church Cemetery in Charleston.

The Manigault family has remained prominent in Charleston, including as owners of the city's daily newspaper, The Post and Courier, which was first purchased by Peter Manigault's great-grandson Arthur in 1896.

All content from Kiddle encyclopedia articles (including the article images and facts) can be freely used under Attribution-ShareAlike license, unless stated otherwise. Cite this article:
Peter Manigault Facts for Kids. Kiddle Encyclopedia.