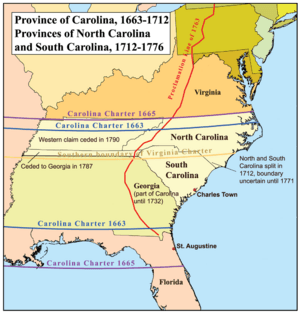 A map of the southern British American colonies, featuring the Provinces of Carolina

The Carolinas were named for King Charles II of England. Derived from Latin Carolus, the colony was originally "Carolana," the spelling eventually changed to "Carolina." [Note that Carolana was also the name of a failed settlement plan in the late 1690s.] Charles Towne was the first settlement, established in 1670.

Charles II had given the land to a group of eight nobles called the Lords Proprietors; they planned for a Protestant Christian colony. Originally a single proprietary colony, the northern and southern sections grew apart over time, due partly to neglect by the (individual) legal heirs of the original Lords Proprietor. Dissent over governance of the province led to the appointment of a deputy governor to administer the northern half of the Carolina colony in 1691. The division of the Carolina Province into North Carolina and South Carolina became complete in 1712. 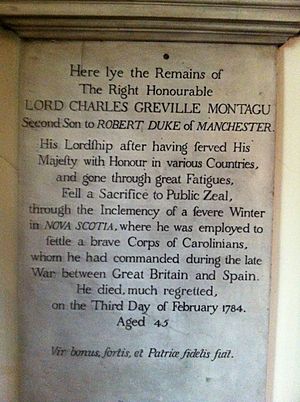 The Yamasee War (1715–1717) ravaged the back-country of the colony. Complaints that the proprietors had not done enough to protect the colonists against either the Indians or the neighboring Spanish, during Queen Anne's War, convinced many residents of the necessity of ending proprietary rule. A rebellion broke out against the proprietors in 1719. Acting on a petition of the residents of the colony, the British government appointed a royal governor for South Carolina in 1720. (The governor of North Carolina would continue to be appointed by the Lords Proprietor until 1729.)

After nearly a decade in which the British government sought to locate and buy out the proprietors, both North Carolina and South Carolina became British royal colonies in 1729.

Lord Charles Montagu (1741-1784) was Royal Governor of the Province of South Carolina from 1766 to 1773 until he escaped to Nova Scotia as with fellow United Empire Loyalists.

All content from Kiddle encyclopedia articles (including the article images and facts) can be freely used under Attribution-ShareAlike license, unless stated otherwise. Cite this article:
Province of South Carolina Facts for Kids. Kiddle Encyclopedia.