Ecclestone was born in London as the younger daughter of former Armani model Slavica Ecclestone (née Radić) and English Formula One billionaire Bernie Ecclestone. She has an older sister, Tamara Jane, and an older paternal half-sister, Deborah.

She contracted viral meningitis at the age of 14, and told the media that it "changed her life forever". She said "I no longer take my health for granted ... I’m now a health freak and a hypochondriac. I’m obsessed with cleanliness, I eat healthily and take my vitamins." She has since become an ambassador for the Meningitis Trust.

Growing up, she wanted to be a fashion designer. She decided to make menswear because it is a "bigger niche" and because "womenswear was too saturated".

At the age of 19, she created the menswear label FORM, which was sold into retailers including Harrods from October 2008. In April 2009 it was announced that Petra had signed a contract with the Croatian clothing manufacturer Siscia. 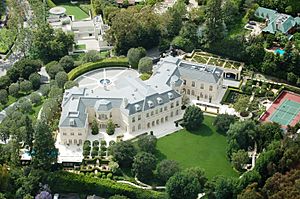 As well as English, she speaks Croatian fluently and understands French and Italian.

On 27 August 2011, Ecclestone married businessman James Stunt. She gave birth to their first child, daughter Lavinia Stunt, in February 2013. In April 2015 she gave birth to twin boys, James Robert Fredrick Stunt Jr and Andrew Kulbir Stunt. They divorced in 2017, and she reverted to her maiden name.

Her 57,000-square-foot (5,300 m2) mansion, The Manor, was the former residence of Candy and Aaron Spelling, and is the largest house in Los Angeles County. According to a 2012 article in the Wall Street Journal, she had first viewed several other properties, including a 36,000-square-foot property on Sunset Boulevard, priced at $49.5 million. The real estate broker Rick Hilton said: "I showed her several properties but they weren't grand enough." In 2014, Ecclestone put The Manor back on the market with a price tag of $150 million. However, she reportedly turned down an offer that met her price in December 2015. The Manor was relisted for sale in October 2016 with an asking price of $200 million. In June 2019, it sold to an anonymous buyer for $119.7 million, the highest sale price in Californian history.

She also owns a residence in Chelsea, London that she bought in 2010 for $90 million. The owner of the construction company that worked on the building, Sayed Bukhari, said in the Wall Street Journal article that she had already been offered more than $125 million for the four-story home.

All content from Kiddle encyclopedia articles (including the article images and facts) can be freely used under Attribution-ShareAlike license, unless stated otherwise. Cite this article:
Petra Ecclestone Facts for Kids. Kiddle Encyclopedia.