Phaius tankervilleae var. australis, also known as the common swamp orchid, southern swamp-orchid, swamp lily or island swamp-orchid, is a species of orchid endemic to eastern Australia. It is an evergreen, terrestrial herb with large, crowded pseudobulbs, large pleated leaves and flowers that are reddish brown on the inside and white outside. 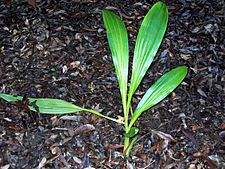 Leaves on a plant in Coffs Harbour

The common swamp orchid was first formally described in 1858 by Ferdinand von Mueller who gave it the name Phaius australis and published the description in Fragmenta phytographiae Australiae. In 2017, Judi Stone and Phillip James Cribb published a monograph entitled Lady Tankerville's Legacy - A Historical and Monographic Review of Phaius and Gastrorchis and reduced Phaius australis to a variety of Phaius tankervilleae.

The common swamp orchid, as Phaius australia, is listed as "endangered" under the Australian Government Environment Protection and Biodiversity Conservation Act 1999 and the New South Wales Government Biodiversity Conservation Act 2016. The main threats to the species are illegal collection of the plants and flowers, habitat loss and invasion by weeds such as lantana and umbrella tree (Schefflera actinophylla).

An easily grown plant in cultivation, it prefers semi shade. Propagation is achieved from seed or by the cutting of the base clump of the plant. The decorative and scented flowers occur between late August and October. Coloured reddish brown with yellow. Another method of regeneration is flower stem node propagation. Where, after flowering, the scape is either laid whole or in sections on a medium such as sphagnum moss or stood in a container of water. Plantlets emerge from the nodes, and when large enough, are removed and potted up. The large flowers occur in spring.

All content from Kiddle encyclopedia articles (including the article images and facts) can be freely used under Attribution-ShareAlike license, unless stated otherwise. Cite this article:
Phaius tankervilleae var. australis Facts for Kids. Kiddle Encyclopedia.