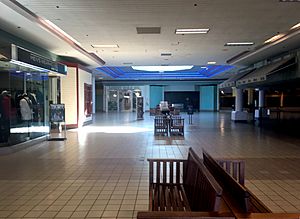 An interior view of the Phillipsburg Mall as of March 26, 2019

Phillipsburg Mall was an indoor shopping mall located along U.S. Route 22 in Warren County, New Jersey, United States. Despite its name, the mall is actually located on the border of Lopatcong Township and Pohatcong Township, just east of Phillipsburg. It is located on the eastern edge of the Lehigh Valley, the metropolitan area of Allentown, Pennsylvania. The mall's anchor store is Kohl's. There are 3 vacant anchor stores that were once The Bon-Ton, Sears, and Black Rose Antiques & Collectibles. As most of its anchor and inline stores have closed, the mall is considered to be a dead mall.

Crown American first announced Phillipsburg Mall in 1985. The original anchor stores chosen were Bradlees, Sears, and Hess's, then a subsidiary of Crown American. As Bradlees was undergoing store closings at the time, Crown American instead chose to make that anchor space a Kmart. The Mall was originally slated for a 1987 opening, but was delayed due to highway and sewage system issues. Upon opening on September 24, 1989, the mall had Kmart, Hess's (the first and only location in New Jersey), and Sears as its anchor stores, as well as 90 smaller stores, with more to come later in the year. Over 7,000 people attended the mall’s grand opening. The Hess’s store even had to skip its ribbon-cutting ceremony due to the crowd of 2,000–3,000 waiting to shop there. Traffic on U.S Route 22 was backed up to a mile from the mall in both directions on opening day. JCPenney would later open in March of 1990. The Hess's store was sold to The Bon-Ton in 1994. Kmart closed its store at Phillipsburg Mall in 2002 as part of bankruptcy proceedings; one year later, the space was sold to Kohl's. The store would open in April 2004.

PREIT, who acquired the Crown American portfolio in 2003, sold the mall to Mason Asset Management/Namdar Realty Group for $11.5 million in 2013. On January 15, 2014, it was announced that the JCPenney store would be closing as part of a plan to close 33 locations nationwide. In addition to this anchor, many stores left the mall in 2013 and 2014.

As those stores were closing, other new shops began to open. An antique shop called Black Rose Antiques & Collectibles began to occupy the former JCPenney space. The store opened on January 1, 2017. Meanwhile, a record store called Spin Me Round Records opened near the former JCPenney space, and also around this time, a Gold's Gym opened in the space once occupied by Hot Topic and several restaurants.

On November 2, 2017, Sears Holdings announced that Sears would also be closing as part of a plan to close 63 Sears & Kmart stores nationwide. The store, the only Sears or Kmart in New Jersey to be closing as a part of this plan, as well as the adjacent Auto center, closed on January 28, 2018.

In mid-November, 2017, The Bon-Ton, struggling with around $1.1 billion in debt, announced a plan to close over 40 stores in 2018, including its Phillipsburg Mall location, and on January 31, 2018 confirmed that closing sales would begin February 1 and run for 10–12 weeks until the store is closed in April. The store closed on April 29, 2018.

In August 2018, due to a heavy rain storm, an approximately 200 sq ft (19 m2) portion of roof in the former Sears collapsed. The former Sears was later demolished in August 2019, followed by the former Bon-Ton in October of that year. Communication from mall ownership about changes have been virtually non-existent.

During an interview with Mason Asset Management President Elliot Nassim for The Morning Call newspaper in March 2019, Nassim stated that the property “...is better suited as something other than a mall.” Throughout 2019, many stores in the mall had closed, including H&M, Victoria’s Secret, AT&T, Gold’s Gym, etc. On December 23, 2019, the remaining tenants of Phillipsburg Mall received lease termination letters, telling them they have 30 days to vacate the mall. As of July 2020, the interior mall has been shuttered. On January 28, 2020, Black Rose Antiques announced that it would be closing as well, which occurred in March. As of March 2020 Kohl's is the only store left. The mall was shuttered sometime in 2020.

On January 29, 2021, Mason Asset Management announced that demolition is scheduled to begin "within the next couple of weeks" and will be wrapped up by June of 2021 to make way for a proposed 852,000 square-foot warehouse.

All content from Kiddle encyclopedia articles (including the article images and facts) can be freely used under Attribution-ShareAlike license, unless stated otherwise. Cite this article:
Phillipsburg Mall Facts for Kids. Kiddle Encyclopedia.