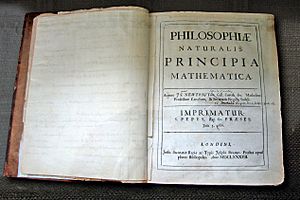 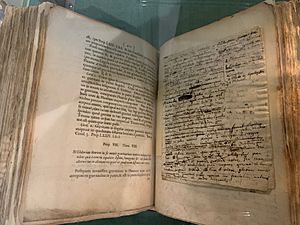 Newton's own copy of the first edition. He wrote on it the changes he wanted to make for the second edition

The Philosophiæ Naturalis Principia Mathematica (Mathematical Principles of Natural Philosophy) is a trilogy, written by Isaac Newton and published on 5 July 1687. The three-book work describes physics and mathematics. It states Newton's laws of motion and the derivation of Kepler's Laws, and observations on gravity.

All content from Kiddle encyclopedia articles (including the article images and facts) can be freely used under Attribution-ShareAlike license, unless stated otherwise. Cite this article:
Philosophiæ Naturalis Principia Mathematica Facts for Kids. Kiddle Encyclopedia.