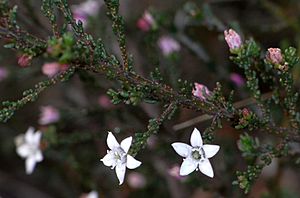 Philotheca angustifolia, commonly known as narrow-leaf wax flower, is a species of flowering plant in the family Rutaceae and is endemic to south-eastern Australia. It is a shrub with small leaves and white flowers with five egg-shaped petals in spring.

Narrow-leaf wax flower was first formally described in 1970 by Paul Wilson who gave it the name Eriostemon angustifolius and published the description in the journal Nuytsia. The type specimen was collected in the lower Mount Lofty Ranges by Darrell Kraehenbuehl. In 1998 Wilson transferred the species to the genus Philotheca as P. angustifolia.

Narrow-leaf wax flower grows in open woodland and mallee. Subspecies angustifolia occurs in central Victoria and in south-eastern South Australia. There is a single record from 1882 in southern New South Wales. Subspecies montana only occurs in mountainous areas in western Victoria.

All content from Kiddle encyclopedia articles (including the article images and facts) can be freely used under Attribution-ShareAlike license, unless stated otherwise. Cite this article:
Philotheca angustifolia Facts for Kids. Kiddle Encyclopedia.