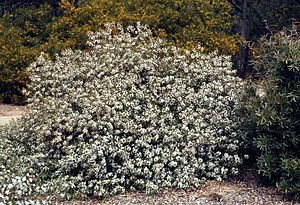 Philotheca myoporoides subsp. myoporoides, commonly known as long-leaf wax flower, is a subspecies of flowering plant in the family Rutaceae and is endemic to south-eastern continental Australia. It is a shrub with oblong to elliptic or egg-shaped leaves and white or pink flowers arranged in groups of three to eight in leaf axils.

In 1824, de Candolle described Eriostemon myoporoides in his book Prodromus Systematis Naturalis Regni Vegetabilis, and in 1988 Michael Bayly changed the name to Philotheca myoporoides in the journal Muelleria. In the same paper, Bayley described nine subspecies, including subspecies myoporoides.

Subspecies myoporoides is the most widespread and most variable of the species and occurs along the Great Dividing Range, mainly from Denman in New South Wales to near Healesville in Victoria. It grows in forest and heath, often near watercourses or on rocky hillsides.

All content from Kiddle encyclopedia articles (including the article images and facts) can be freely used under Attribution-ShareAlike license, unless stated otherwise. Cite this article:
Philotheca myoporoides subsp. myoporoides Facts for Kids. Kiddle Encyclopedia.