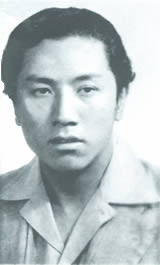 Phuntsok Wangyal Goranangpa or Bapa Phuntsok Wangyal (Chinese: 平措汪杰; January 1922 – 30 March 2014), better known as Phuntsog Wangyal and sometimes Phünwang, was a Tibetan politician. He was a communist and is best known for having founded the Tibetan Communist Party. For his activities, he was arrested by Chinese authorities and was jailed for eighteen years at the Qincheng Prison. He was born in Batang, in the province of Kham, eastern Tibet.

Wangyal died from lung failure on 30 March 2014 at a hospital in Beijing, China. He was 91 years old.

All content from Kiddle encyclopedia articles (including the article images and facts) can be freely used under Attribution-ShareAlike license, unless stated otherwise. Cite this article:
Phuntsok Wangyal Facts for Kids. Kiddle Encyclopedia.