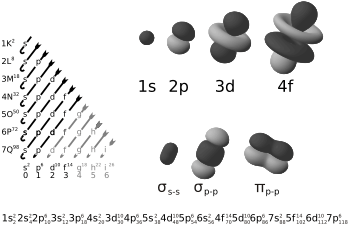 Electron atomic and molecular orbitals, showing a pi bond at the bottom right of the picture.

In chemistry, a pi bond (π bond) is a covalent chemical bonds where the orbital path of one electron crosses (overlaps) with the path of another. The electrons have a lobe shaped figure of eight path (see picture). There are two areas of overlap as the paths overlap on both lobes. Only one of the orbital's nodal planes passes through both of the involved nuclei. 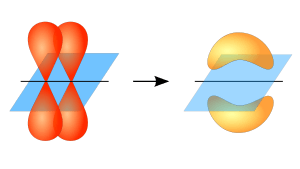 The Greek letter π in their name refers to p orbitals. The orbital symmetry of the pi bond looks the same as the p orbital when seen down the bond axis. P orbitals usually have this sort of bonding. D orbitals are also assumed to use pi bonding but this is not necessarily what happens in reality. The idea of bonding d orbitals fits in with the theory of hypervalence.

Pi bonds are usually weaker than sigma bonds. Quantum mechanics says this is because the orbital paths are parallel so there is much less overlap between the p-orbitals.

Pi bonds happen when two atomic orbitals are in contact through two areas of overlap. Pi-bonds are more spread out bonds than the sigma bonds. Electrons in pi bonds are sometimes called pi electrons. Molecular fragments joined by a pi bond cannot rotate about that bond without breaking the pi bond. The rotation destroys the parallel paths of the two p orbitals.

A pi bond is weaker than a sigma bond, but the combination of pi and sigma bond is stronger than either bond by itself. The extra strength of a multiple bond versus a single (sigma bond) is shown in many ways. The most obvious is a contraction in bond lengths. For example in organic chemistry, carbon-carbon bond lengths are in ethane (154 pm), in ethylene (134 pm) and in acetylene (120 pm). More bonds make the total bond shorter and stronger. Electronic configuration is based on S,P,D,and f -Block. S has 2 electrons P has 6 electrons D has 10 electrons F has 14 electrons

Pi bonds do not necessarily join a pair of atoms that are also sigma-bonded.

In some cases of multiple bonds between two atoms, there is no sigma bond at all, only pi bonds. Examples include diiron hexacarbonyl (Fe2(CO)6), dicarbon (C2) and the borane B2H2. In these compounds the central bond has only pi bonding. In order to get the most orbital overlap the bond distances are much shorter than expected.

All content from Kiddle encyclopedia articles (including the article images and facts) can be freely used under Attribution-ShareAlike license, unless stated otherwise. Cite this article:
Pi bond Facts for Kids. Kiddle Encyclopedia.