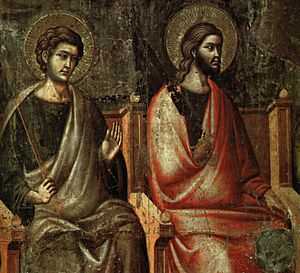 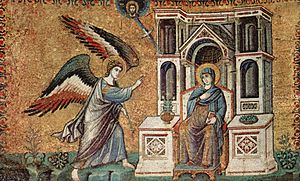 The Annunciation, Santa Maria in Trastevere

Pietro Cavallini, (c.1250 – c.1330) was a painter who lived and worked in Rome in Italy in the Late Medieval period. He may have also worked in Naples. He is thought of as one of the greatest painters of his day, but has never been as well known as Giotto from Florence, who was alive at the same time. This is probably because only two pictures by Cavallini still exist. One of them is a mosaic in the Church of Santa Maria in Trastevere. The other is a fresco in the nearby convent of Santa Cecilia in Trastevere. ("in Trastevere" means "in the part of the Rome that is across the Tiber River".)

The fresco at Santa Cecilia's is a large picture of the Last Judgement with Jesus sitting between rows of saints. (see right) Unfortunately, the room, which was quite tall, had a new level added, and the floor cut across the fresco. It is in ruins, but the parts that remain show that Cavallini was trying to make the figures that he painted look solid and three-dimensional like the frescos of Ancient Rome. Pietro Cavallini probably influenced the artists who travelled from Rome to work at the Basilica of St Francis of Assisi. It is not known if he painted any of the frescos there.

All content from Kiddle encyclopedia articles (including the article images and facts) can be freely used under Attribution-ShareAlike license, unless stated otherwise. Cite this article:
Pietro Cavallini Facts for Kids. Kiddle Encyclopedia.