The pine woods tree frog (Dryophytes femoralis), is a species of frog in the family Hylidae, endemic to the southeastern United States. 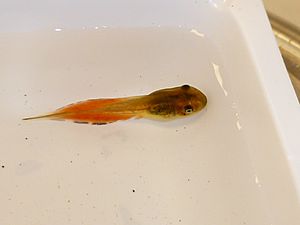 Like many amphibian species' tadpoles, those of the pinewoods tree frog are susceptible to parasitic infection by trematode flatworms. However, tadpoles swim in a manner that does not necessarily reduce the intensity of infection, but reduces the likelihood of these parasites infecting in the head and body region; instead, their swimming behavior shunts parasites to the tail area, where infection by parasites causes fewer harmful effects.

The pine woods tree frog is a very small species, growing to a length of 25 to 38 mm (0.98 to 1.50 in). The color varies, sometimes being mottled brownish-gray, deep reddish-brown, gray, or grayish-green, usually with dark markings on its back. It is very similar in appearance to the squirrel tree frog but it can be distinguished from that species by the series of yellow, orange, or white dots that can be seen on the back of the thigh when the hind leg is extended. The toes have large toe pads but little webbing. Their distinctive call can be heard between April and October; it is a series of staccato sounds, giving it the nickname of "Morse code frog".

The pine woods tree frog is found in the southeastern United States on the plains of the Atlantic and Gulf Coasts, its range extending from Virginia to Florida and Louisiana. It climbs high in trees, but also sometimes descends to ground level and favors pine woods, savannahs, mixed pine and turkey oak woodlands, and cypress swamps. During droughts or cold weather, it hides in or under rotten logs or in moist crevices in trees.

The pine woods tree frog mainly eats insects. Breeding takes place at any time between March and October. The male calls, especially at dusk, from locations close to water, such as trees, bushes, and inside clumps of vegetation. The female lays about 100 eggs on or just below the surface of the water, which may be a ditch or temporary pool. The tadpoles are fully developed and ready to undergo metamorphosis at about two months old.

The pine woods tree frog is listed as being of "Least Concern" in the IUCN Red List of Threatened Species. Its large population is believed to be stable, and it is common over much of its wide range.

All content from Kiddle encyclopedia articles (including the article images and facts) can be freely used under Attribution-ShareAlike license, unless stated otherwise. Cite this article:
Pine woods tree frog Facts for Kids. Kiddle Encyclopedia.