Pinus arizonica, commonly known as the Arizona pine, is a medium-sized pine in northern Mexico, southeast Arizona, southwest New Mexico, and western Texas in the United States. It is a tree growing to 25–35 m tall, with a trunk diameter of up 1.2 m (3 ft 11 in). The needles are in bundles of 3, 4, or 5, with 5-needle fascicles being the most prevalent. This variability may be a sign of hybridization with the closely related ponderosa pine (Pinus ponderosa). The cones are single, paired, or in whorls of three, and 5–11 cm long.

The Arizona pine was commonly thought to be a variant of Ponderosa pine, but since at least 1997 it is now recognized as a distinct species by most authorities.

This pine is a source of construction timber, and is heavily harvested for firewood. Extensive cutting has reduced the formerly widespread Arizona pine forests, particularly in Mexico. 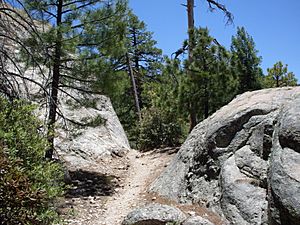 All content from Kiddle encyclopedia articles (including the article images and facts) can be freely used under Attribution-ShareAlike license, unless stated otherwise. Cite this article:
Pinus arizonica Facts for Kids. Kiddle Encyclopedia.