Pioneer was built in Marcus Hook, Pennsylvania in 1885 as a cargo sloop. She was the first of only two American cargo sloops ever built with a wrought iron hull. After ten years of service in the Delaware Bay, she was re-rigged as a schooner for easier handling.

In 1930, the Pioneer was sold to a buyer in Massachusetts. By this point, she had been fitted with an engine and no longer being used as a sailing vessel. She was sold again in 1966 to Russell Grinnell, Jr. of Gloucester for use in his dock building business. Grinnell restored Pioneer's schooner rig and rebuilt her hull in steel plating, leaving the iron frame intact. Upon his death in 1970, he donated Pioneer to the South Street Seaport Museum. 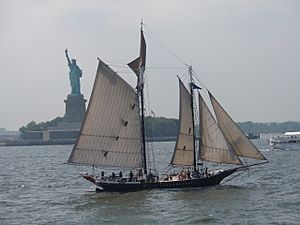 Schooner Pioneer sailing near the Statue of Liberty in 2010.

The Pioneer sails seasonally from South Street Seaport in Manhattan, offering daily sails to the public as well as charter sails and educational programs for children.

The crew is a combination of professionals and volunteers.

All content from Kiddle encyclopedia articles (including the article images and facts) can be freely used under Attribution-ShareAlike license, unless stated otherwise. Cite this article:
Pioneer (schooner) Facts for Kids. Kiddle Encyclopedia.