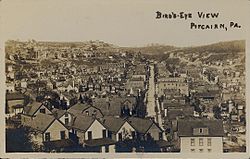 Pitcairn is a borough in Allegheny County, Pennsylvania, 12 miles (19 km) east of Pittsburgh's central business district, named for Robert Pitcairn, an official of the Pennsylvania Railroad.

Pitcairn Yard, which opened in 1892 and was for many decades a major switching yard of the Pennsylvania Railroad, later the Penn Central Railroad and Conrail, is now, since the 1990s, an intermodal freight transport yard for the Norfolk Southern Railway, where containers are taken off trains and transferred to trucks for delivery, or from trucks to trains.

In 1971 the first Fox's Pizza Den was opened on Broadway Boulevard in Pitcairn. It remains open to this day.

K-12 students in Pitcairn are served by the Gateway School District, a public school district with a student population of 4,300.

In February, 2012, the Gateway School Board approved a Propel charter school proposal to open a kindergarten through 8th grade charter school within the district's borders. Propel operates 9 schools in Allegheny County. The Propel charter school re-opened the former Pitcairn Elementary Building on Agatha Street, which the Gateway board had closed in 2011. The school opened with little controversy to approximately 300 kindergarten through 6th grade students in August, 2012, with a planned expansion to 8th grade over the following two years.

Pitcairn was the birthplace of bandleader Ted Weems and of musical instrument maker Carl Thompson, as well as early NFL football player Harry Robb. Pitcairn was also the birthplace of Robert Dewees "Cutty" Cutshall, a trombonist who played with the bands of Jan Savitt, Benny Goodman, Eddie Condon, and was a founding member of Lawson/Haggart's World's Greatest Jazz Band. Cutty's base was out of New York City, where he made countless records and also played at the world famous Rainbow Room.

All content from Kiddle encyclopedia articles (including the article images and facts) can be freely used under Attribution-ShareAlike license, unless stated otherwise. Cite this article:
Pitcairn, Pennsylvania Facts for Kids. Kiddle Encyclopedia.