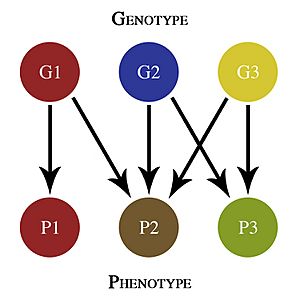 Pleiotropism is a central term in developmental genetics. In pleiotropism, a single gene affects a number of phenotypic traits in the same organism.

These pleiotropic effects often seem to be unrelated to each other. The usual underlying mechanism is that the same gene is activated in several different tissues, producing apparently different effects. It follows that the phenomenon must be extremely common, since most genes will have effects in more than one tissue.

The term may be contrasted with pleiomorphism, in which a genetically uniform group of organisms shows variable phenotypes.

Pleiotropy has significance for the theory of evolution. It has often been claimed that some heritable features of animals are not the product of adaptation by natural selection. Much of this may be explained by pleiotropism. Strong selection for one or two aspects of gene function will automatically bring along some other pleiotropic traits. These other traits, though inherited, may be neutral or even slightly deleterious in terms of selection.

Antagonistic pleiotropy refers to the expression of a gene resulting in multiple competing effects, some beneficial but others detrimental to the organism. Three circumstances are possible:

1. Simultaneously, a gene may cause deleterious traits which are outbalanced by the survival value of positive traits.

2. A gene may increase fitness in the younger, fertile organism, yet contribute to decreased fitness later in life. The reproductive contribution at the younger stages of life will ensure the spread of such a gene.

3. A gene may increase fitness in some habitats, but not others. Its survival in the population is then balanced. An example is a bacterial gene which enhances glucose use at the expense of the ability to use other energy sources (such as lactose). This has positive effects when there is plenty of glucose, but can be lethal if lactose is the only available food source.

All content from Kiddle encyclopedia articles (including the article images and facts) can be freely used under Attribution-ShareAlike license, unless stated otherwise. Cite this article:
Pleiotropism Facts for Kids. Kiddle Encyclopedia.