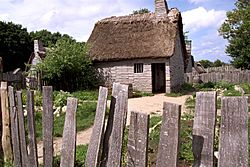 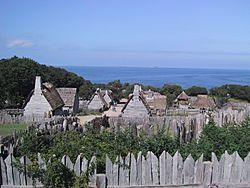 Plimoth Plantation (also known as Plimoth Patuxet) is a living history museum in Plymouth, Massachusetts, founded in 1947. It attempts to replicate the original settlement of the Plymouth Colony established in the 17th century by the English colonists who became known as the Pilgrims. They were among the first people who immigrated to America to seek religious separation from the Church of England.

In the 1624 English Village section of the museum, first-person interpreters have been trained to speak, act, and dress appropriately for the period, whereas third-person (or modern) interpreters have been trained to answer inquiries that guests may have which those in character are unable to answer while in their respective roles. At Plimoth Plantation, they are called historical interpreters, and they interact with their "strange visitors" (i.e., the modern general public) in the first person, answering questions, discussing their lives and viewpoints, and participating in tasks such as cooking, planting, blacksmithing, and animal husbandry. depicting day-to-day life and seasonal activities, as well as featuring some key historical events, such as funerals and special celebrations.

Henry Hornblower II started the Museum in 1947 with help and support from friends, family, and business associates, as two English cottages and a fort on Plymouth's waterfront. Since then, the Museum has grown to include a Mayflower II replica (1957), the English Village (1959), the Wampanoag Homesite (1973), the Hornblower Visitor Center (1987), the Craft Center (1992), the Maxwell and Nye Barns (1994), and the Plimoth Grist Mill (2013). Alongside the settlement is a re-creation of a Wampanoag home site, where modern Native Americans from a variety of tribes explain and demonstrate how the Wampanoag's ancestors lived and interacted with the settlers (not in period character, but in traditional dress). 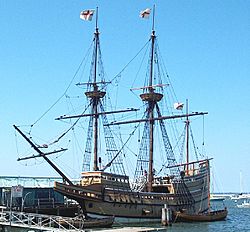 The museum grounds at Plimoth Plantation also include Nye Barn, where historical breeds of livestock are kept, a crafts center where many objects are created for use in the village exhibits, a cinema where educational videos are shown, a Colonial Education site for youth and adult groups, and visitors' center with indoor exhibits and educational programs. The two houses on the Colonial Education site were built by Plimoth Plantation for the PBS show Colonial House filmed in Maine. Following the filming, the museum disassembled the houses and reconstructed them at Plimoth Plantation. The roof of one of these houses, the Cook House, was destroyed by a fire from a fireplace on November 19, 2011, and the building had to be torn down.

Mayflower II is docked near Plymouth Rock and is also under the care of the museum. Colonial first-person interpreters represent the sailors and officers of the ship circa the 1620s. At some times, the "sailors" go on week-long trips to experience what it was like for the Pilgrims.

In July 2020, officials announced that the museum would be renamed, noting that their plan "...for some time, has been to announce a new name for the Museum later this year as we commemorate the 400th anniversary (1620-2020) of the Pilgrims' arrival on the shores of historic Patuxet." It coincided with a wave of name changes that year meant to be more inclusive. Officials stated that such discussions had been ongoing for more than a year, asking themselves "Does our name reflect the full, multivalent history that is at the core of the museum’s mission?" While a new name was not yet revealed, the museum began using a new logo that included "Plimoth Patuxet" instead of "Plimoth Plantation".

All content from Kiddle encyclopedia articles (including the article images and facts) can be freely used under Attribution-ShareAlike license, unless stated otherwise. Cite this article:
Plimoth Plantation Facts for Kids. Kiddle Encyclopedia.