Po'pay is a statue of Po’pay (also known as Popé), a Tewa and one of the Pueblo leaders during the Pueblo Revolt against the Spanish in 1680. The statue was carved by Cliff Fragua, a sculptor from Jemez Pueblo, out of a solid block of Tennessee marble.

New Mexico was the last state to place its second statue in the National Statuary Hall Collection, making it the 100th statue placed there. Po'pay was the twentieth military leader, the twelfth religious leader, and joined six other Native Americans in the Collection. 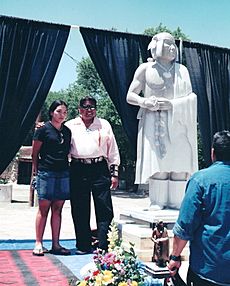 Cliff Fragua and statue at Ohkay Owingeh, May 2005 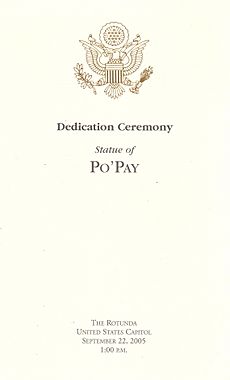 In 1997, New Mexico Senate Bill 404 was introduced by Rep. Manny Aragon (D-Bernalillo) and Nick Salazar (D-Rio Arriba), which nominated Po’Pay to fill the second New Mexico spot in the Hall. The bill was passed and signed into law by Governor Gary E. Johnson. A Statuary Hall Commission was then established whose purpose was to select a sculptor and to raise funds. Fragua was selected as the sculptor.

Carved by Fragua in his studio at Jemez Pueblo over three years, the statue had its first public showing at Ohkay Owingeh pueblo on May 21, 2005, where Po'pay was from. There the statue was blessed before it was allowed to continue on the Washington, D.C., where it was unveiled in the Capitol rotunda on September 22, 2005.

All content from Kiddle encyclopedia articles (including the article images and facts) can be freely used under Attribution-ShareAlike license, unless stated otherwise. Cite this article:
Po'pay (Fragua) Facts for Kids. Kiddle Encyclopedia.