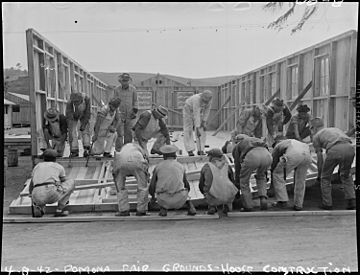 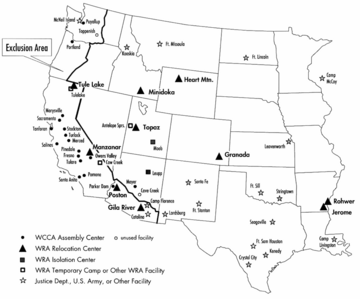 Institutions of the War Relocation Authority in the Midwestern, Southern, and Western United States

After the attack on Pearl Harbor on December 7, 1941, it was feared that some Japanese Americans might be loyal to the Empire of Japan and Emperor of Japan. President Franklin D. Roosevelt on February 19, 1942 signed Executive Order 9066, which authorized the Secretary of War to prescribe certain areas as military zones, clearing the way for the incarceration of Japanese Americans, German Americans, and Italian Americans in U.S. concentration camps. The Los Angeles County Fairgrounds was selected as one of the Southern California detention camps. The other Los Angeles County camp selected was the Santa Anita assembly center at the Santa Anita Racetrack, which is also a California Historic Landmark (No. 934.07). A California Historic Landmark plaque is located near Fairplex, on the grassy drop off area, north of the intersection of Canyon Way and West McKinley Avenue, at around 1099 West McKinley Avenue, Pomona, California.

Construction on the Pomona Assembly Center began on March 21, 1942, and the camp officially opened on May 7, 1942. The Pomona Facility consisted of 309 barracks, 8 mess halls, and 36 shower and latrine facilities. The first group of 72 Japanese American citizens arrived on May 9. By May 15, 1942 the Pomona site was operating near capacity, with 4,270 internees. Pomona reached a peak population of 5,434 before its closing on August 24, 1942. Most internees there were transferred to Heart Mountain in Wyoming. The site remained in use for the duration of the war, first housing U.S. troops, and then German and Italian prisoners of war. Today, the site serves as the Fairplex parking lot.

In California, 13 temporary detention facilities were built. Large venues that could be sealed off were used, such as fairgrounds, horse racing tracks and Works Progress Administration labor camps. These temporary detention facilities held Japanese Americans while permanent concentration camps were built in more isolated areas. In California Camp Manzanar and Camp Tulelake were built. Executive Order 9066 took effect on March 30, 1942. The order required all native-born Americans and long-time legal residents of Japanese ancestry living in California to surrender themselves for detention.

Japanese Americans were held until the end of the war in 1945. In total 97,785 Californians of Japanese ancestry were held during the war.

All content from Kiddle encyclopedia articles (including the article images and facts) can be freely used under Attribution-ShareAlike license, unless stated otherwise. Cite this article:
Pomona Assembly Center Facts for Kids. Kiddle Encyclopedia.