Pontypridd is both the county town of Rhondda Cynon Taf in Wales and a community. Often colloquially known as "Ponty", it is 12 miles (19 km) north of Cardiff.

The town sits at the junction of the Rhondda and Taff/Cynon valleys, where the River Rhondda flows into the Taff immediately south of the town at Ynysangharad War Memorial Park. Pontypridd community had a population of approximately 32,700 according to census figures gathered in 2011. while Pontypridd Town Ward itself was recorded as having a population of 2,919 also as of 2001.

The town lies alongside the dual carriageway north-south A470, between Cardiff and Merthyr Tydfil. The A4054, running north and south of the town, was the former main road, and, like the A470, follows the Taff Valley. South of the town is the A473, for Llantrisant and Pencoed. To the west is the A4058, which follows the River Rhondda to Porth and the Rhondda Valley beyond.

The name Pontypridd derives from the name Pont-y-tŷ-pridd, Welsh for "bridge by the earthen house", a reference to a succession of wooden bridges that formerly spanned the River Taff at this point.

Pontypridd is noted for its Old Bridge, a stone construction across the River Taff built in 1756 by William Edwards. This was Edwards' third attempt, and, at the time of construction, was the longest single-span stone arch bridge in the world. Rising 35 feet (11 m) above the level of the river, the bridge forms a perfect segment of a circle, the chord of which is 140 feet (43 m). Notable features are the three holes of differing diameters through each end of the bridge, the purpose of which is to reduce weight. On completion, questions were soon raised as to the utility of the bridge, with the steepness of the design making it difficult to get horses and carts across. As a result, a new bridge, the Victoria Bridge, paid for by public subscription, was built adjacent to the old one in 1857. Pontypridd was known as Newbridge from shortly after the construction of the Old Bridge until the 1860s. 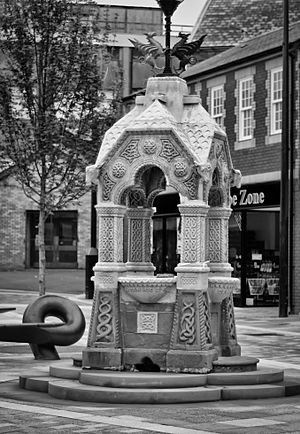 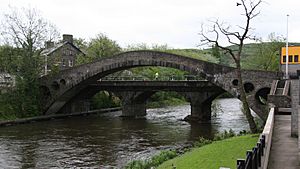 The history of Pontypridd is closely tied to the coal and iron industries; prior to the developments of these, Pontypridd was largely a rural backwater comprising a few farmsteads, with Treforest initially becoming the main urban settlement in the area. Sited as it is at the junction of the three valleys, it became an important location for the transportation of coal from the Rhondda and iron from Merthyr Tydfil, first via the Glamorganshire Canal, and later via the Taff Vale Railway, to the ports at Cardiff, Barry, and to Newport. Because of its role in transporting coal cargo, its railway platform is thought to have once been the longest in the world during its heyday. Pontypridd was, in the second half of the 19th century, a hive of industry, and was once nicknamed the ‘Wild West’. There were several collieries within the Pontypridd area itself, including: 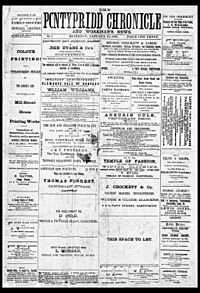 Front page of the earliest surviving copy of the Welsh newspaper The Pontypridd Chronicle; 15 January 1881

As well as the deep-mined collieries, there were many coal levels and trial shafts dug into the hillsides overlooking the town from Cilfynydd, Graig, Graigwen, and Hafod. The Albion Colliery in the village of Cilfynydd in 1894 was the site of one of the worst explosions within the South Wales coalfield, with the death of 290 colliers (see Keir Hardie).

Other instrumental industries in Pontypridd were the Brown Lenox/Newbridge Chain & Anchor Works south-east of the town, and Crawshay's Forest Iron, Steel & Tin Plate Works and the Taff Vale Iron Works, both in Treforest near the now University of South Wales.

All content from Kiddle encyclopedia articles (including the article images and facts) can be freely used under Attribution-ShareAlike license, unless stated otherwise. Cite this article:
Pontypridd Facts for Kids. Kiddle Encyclopedia.