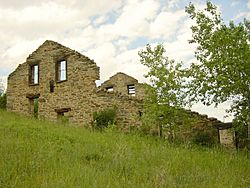 Pony is an unincorporated community in northeastern Madison County, Montana, United States on the eastern edge of the Tobacco Root Mountains. It includes the 192-acre (78 ha) Pony Historic District, a historic district with 95 contributing buildings listed on the National Register of Historic Places.

The town gained its name from the nickname of one of its early miners, Tecumseth Smith, a small man nicknamed "Pony" because of his diminutive size.

Settled in the 1860s, in the late nineteenth century, Pony was a prosperous gold-mining community with at least 5,000 residents. Mining operations declined in the early 20th century and all were closed by 1922.

A number of historic buildings from Pony's boom era remain in the old town today. Major buildings are managed, voluntarily, by The Pony Homecoming Club, a non-profit organization that maintains the town's public spaces.

Montana Highway 283 passes through town. It is about 6 miles from Harrison.

All content from Kiddle encyclopedia articles (including the article images and facts) can be freely used under Attribution-ShareAlike license, unless stated otherwise. Cite this article:
Pony, Montana Facts for Kids. Kiddle Encyclopedia.