Port of Kaohsiung facts for kids

The Port of Kaohsiung (POK; Chinese: 高雄港; pinyin: Gāoxióng Gǎng; Pe̍h-ōe-jī: Ko-hiông-káng) is the largest harbor in Taiwan (Republic of China), handling approximately 10.26 million twenty-foot equivalent units (TEU) worth of cargo in 2015. The port is located in southern Taiwan, adjacent to Kaohsiung City, and surrounded by the city districts of Gushan, Yancheng, Lingya, Cianjhen, Siaogang, as well as Cijin. It is operated by Taiwan International Ports Corporation, Taiwan's state-owned harbor management company. 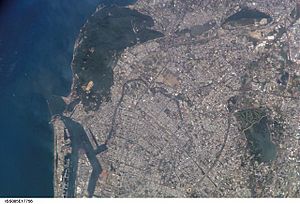 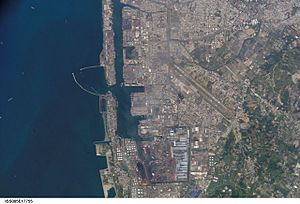 The port was a natural lagoon before eventually developed through into a modern harbor over the period of several hundred years. At the time of 16th century, some villages had already established on the seashore of the present-day Kaohsiung, which was called as "Takau" by natives at that time. The colonists of Dutch East India Company (VOC) arrived at Takau in 1620s and then began to develop the lagoon. The port, historically referred to as the "Takau Port", developed gradually during the Dutch Era, Koxinga Era, and the early Qing Dynasty.

In 1858, the Qing Dynasty lost the Second Opium War to the French-British and signed the Treaties of Tianjin. According to the treaties, the Qing's government was asked to open five ports of Taiwan for foreign trade. As one of the five ports, Takao Port had officially opened to the western traders since 1864. Afterward, the Qing's government ceded Taiwan to Japanese in 1895 after losing First Sino-Japanese War.

In the early Japanese era, the colonial government decided to undertake large projects with the intention to develop the port into a modern harbor. Japanese built the port up in three stages, the first was finished in 1908, the second in 1912, and the third was halted half way at the start of World War II. During World War II, the port was heavily bombed by the western Allies.

After the war, the government of the Republic of China restarted development of the port. The "second port" was built in 1975 by breaking the land bridge between Siaogang and Cijin.

At the southern side of the second port entrance, a museum and park currently stands nearby the recently established Intercontinental Terminal (No.6 Terminal) . This museum describes the history and clearance of a significantly sized residential community which was situated nearby to the expanded port.

All content from Kiddle encyclopedia articles (including the article images and facts) can be freely used under Attribution-ShareAlike license, unless stated otherwise. Cite this article:
Port of Kaohsiung Facts for Kids. Kiddle Encyclopedia.