Praa Sands (Cornish: Poll an Wragh), (formerly Prah Sands) commonly pronounced pray or prah, is a white-sand beach and coastal village in Cornwall, England. It is in the parish of Breage and lies off the A394 road between Helston and Penzance. Formerly serving the local mining industry, it is now mostly a tourist-orientated area. 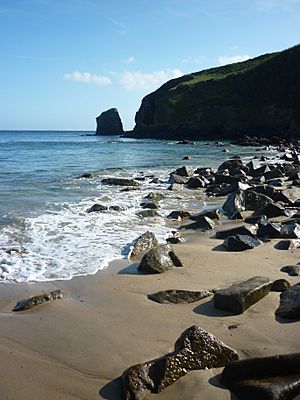 The beach at Praa Sands

Praa Sands is situated in a sheltered indentation within Mount's Bay; it has a long, wide, sandy, south-facing beach that is lapped by comparatively large waves for the area. The beach, which has shallow water and is manned by seasonal lifeguards, attracts surfers and holidaymakers. Adjacent to the beach are traditional retail outlets serving the holidaymaker.

Praa Sands lies within the Cornwall Area of Outstanding Natural Beauty (AONB). The western side of Praa Sands beach contains Folly Rocks Site of Special Scientific Interest, which is noted for its geological aspects, including a granite porphyry.

On 1 February 1882 a pumping engine at Sydney Cove (part of Mount's Bay Consols) was fired. In September 1882 it was reported in The Cornishman newspaper that an engine house was nearly complete and the engine was being put in.

During World War II, after an air battle against eight German aeroplanes over the Bay of Biscay, a Sunderland flying boat was heavily damaged. The crew returned 800 miles to the Cornish coast, where pilot Colin Walker landed and beached the aircraft at Praa Sands. The local people of Praa Sands took the crew into their houses and gave them medical assistance. Walker received the Distinguished Service Order and several of the other crew members also won medals. On 2 June 2013, a memorial was opened on the green at Praa Sands.

Praa sands was a favourite site for testing many WW2 craft including canoes. On 2 February 1943 the DNC telegraphed the order with the CP contract to Saro’s Ltd Saunders-Roe for the single prototype Mk2* canoe [collapsing vertically] with outriggers. It was completed in three weeks and ready for the Cornwall surf trials at Praa Sands. Trials of this prototype [never produced in this form, subsequently, without outriggers, a Mk2**, a three man version[collapsing vertically] of the Mk2 was], as well as the Mk2, Mk3 (May-Luard) and a kayak were held at Praa Sands in Cornwall during 16-17 March 1943, which coincided with trials of surf boats. The trials were to observe the behaviour of the canoes in surf. The RMBPD provided an up-to-date version of the Mk2 two man canoe which was the canoe used during the Frankton Raid, undertaken by the Cockleshell Heroes [RMBPD]. The Mk2 was the first purpose built 'commando' canoes to ever be produced for a purpose; it was 15ft long and collapsed vertically to c.7 inches.

All content from Kiddle encyclopedia articles (including the article images and facts) can be freely used under Attribution-ShareAlike license, unless stated otherwise. Cite this article:
Praa Sands Facts for Kids. Kiddle Encyclopedia.