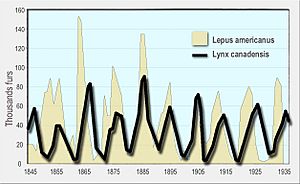 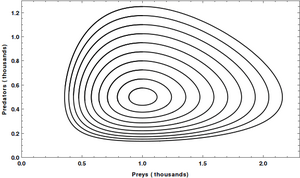 Solutions of the predator-prey equations for different starting conditions

The predator-prey equations is a system of two linked equations that models two species that depend on each other: One is the prey, which provides food for the other, the predator. Both prey and predator populations grow if conditions are right. Alfred J. Lotka found these equations in 1925. Vito Volterra found them, independently, in 1926. For this reason, the equations are also called Lotka-Volterra equations.

The equations themselves are non-linear differential equations.

There are a number of pre-conditions

In this case the solution of the differential equations is deterministic and continuous. This means that the generations of both the predator and prey are overlapping all the time.

The solutions to the equations lead to the Lotka-Volterra rules:

In one of his books, Volterra provided statistics on the number of certain cartilagenous fish caught at some Italian ports in the Mediterranean. Volterra used the term "sélaciens", which refers to sharks. These often prey on other fish. In the table, Volterra provided numbers for 1905, and 1910 to 1923:

The use of the first Lotka-Volerra rule in economics is known as pork cycle.

Most of Volerra's work is about extending the model to be able to handle more than two classes of animals interacting.

All content from Kiddle encyclopedia articles (including the article images and facts) can be freely used under Attribution-ShareAlike license, unless stated otherwise. Cite this article:
Predator-prey equations Facts for Kids. Kiddle Encyclopedia.