Prestolee Aqueduct is a stone-built aqueduct in Prestolee, Kearsley in the Metropolitan Borough of Bolton, Greater Manchester, England. The four-arch structure was constructed in 1793 to carry the Manchester, Bolton and Bury Canal across the River Irwell. It is now preserved as a Grade II listed building.

The aqueduct is one of two remaining major structures on the canal, the other being the Clifton Aqueduct. A third major aqueduct, Damside Aqueduct, was demolished in the 1950s.

As of 2007, the aqueduct still carried water, although it was not navigable as adjoining sections of the canal are in need of restoration. 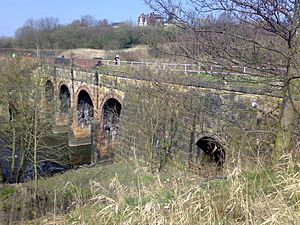 The Bolton arm of the canal runs underneath the house at the very top of this image, and is accessed via a set of locks

All content from Kiddle encyclopedia articles (including the article images and facts) can be freely used under Attribution-ShareAlike license, unless stated otherwise. Cite this article:
Prestolee Aqueduct Facts for Kids. Kiddle Encyclopedia.