Price’s Scrub State Park is a 962-acre Florida state park located in Marion County, Florida. The park has relatively high biodiversity with several natural communities, including its scrub, and is important in the proposed regional connection of conservation lands. The park is a part of the proposed Northwest Marion Greenway. This corridor would connect Paynes Prairie Preserve State Park to Goethe State Forest and could be used for recreational activities, particularly horseback riding.

The location of the park is along Interstate 75. Micanopy is one mile north, Ocala is 21 miles southeast, and Gainesville is 12 miles north, approximately. Although it is located in Marion County, the park is contiguous with and south of Alachua County. 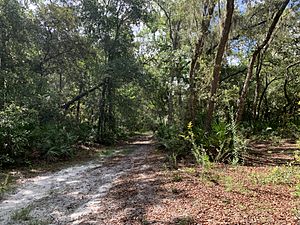 Trail in the park

The park has a 9.5-mile trail network. The trails in the north are more shaded with rolling hills, and the trails in the south are more sandy and open. Possible activities include horseback riding, hiking, birdwatching and cycling. Bicycling may be difficult in the sandy areas. Amenities include a grassy parking lot, picnic tables, portable toilets, and a watering trough for horses.

There are canopies of sand pines and pond pines and has an understory of saw palmetto, fetterbush, gallberries, broom sedge, and saltbush among other flora. Almost 70 species of birds have reported at the park.

All content from Kiddle encyclopedia articles (including the article images and facts) can be freely used under Attribution-ShareAlike license, unless stated otherwise. Cite this article:
Price's Scrub State Park Facts for Kids. Kiddle Encyclopedia.