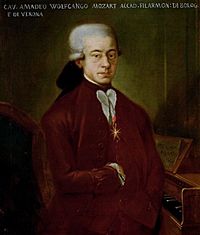 A child prodigy is a child who is very smart at an early age. They can do things that average people can only do when they are adults. Child prodigies are often musicians or mathematicians. A child prodigy does not always grow up to be a world-famous genius. Some of them lose their exceptional gifts in adulthood.

All content from Kiddle encyclopedia articles (including the article images and facts) can be freely used under Attribution-ShareAlike license, unless stated otherwise. Cite this article:
Child prodigy Facts for Kids. Kiddle Encyclopedia.